From Page to Stage: The Best Christmas Pageant Ever – A Readers' Theater Workshop for Children 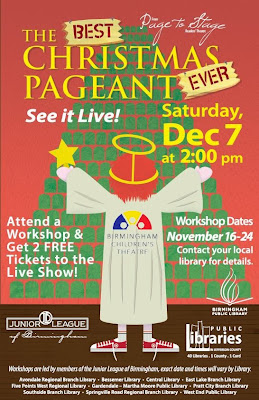 The Birmingham Public Library (BPL), in partnership with the Birmingham Children’s Theater (BCT) and Junior League of Birmingham (JLB), would like to invite you to attend From Page to Stage: The Best Christmas Pageant Ever — A Readers’ Theater Workshop for Children.

In anticipation of the upcoming BCT performance of The Best Christmas Pageant Ever, BPL will be hosting free workshops at some of its area libraries. Children, aged 7 to 12, will learn how storybook characters come alive through the magic of theater. JLB members will coach the children and introduce them to similar literature located in their local library. Each child will receive two free tickets (one child and one adult ticket) to the BCT The Best Christmas Pageant Ever production on December 7 at 2:00 p.m.

A new, better-than-ever production! This is a hilarious holiday story that will delight all ages. No one wants to be in the annual Christmas play at the local church except six irascible siblings who have never hear the story of Christmas. Ultimately, their energy and sincerity triumphs as they make this year’s pageant the best one ever. The play is based on a book by Barbara Robinson.

Workshop space is limited, so contact your participating library location to register a child for the remaining workshops. Libraries and dates are as follows: