Book Review: The Stones of Florence 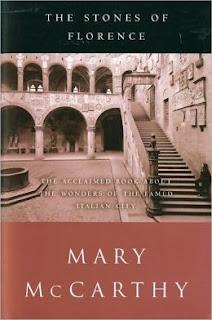 The Stones of Florence
Mary McCarthy

Mary McCarthy’s gossipy The Stones of Florence, first published in 1959, should be read before one’s first visit to this famous city. She strips away the veil of prettiness that prevents us from seeing it truly. Venice is pretty, but no one would say that of the stone canyons of New York City, so similar to wealthy Florence with its densely packed stone fortresses built over the grid of an ancient Roman military camp.

“The discontented shade of Cataline, dressed in consular toga, haunts Florentine history. It is not hard to imagine some of his cohorts surviving…. Fathering children from whose seed would spring the fierce factions of medieval Tuscany.”

Seen from the hills across the Arno River, the skyline of Florence is nearly flat, but 800 years ago giant defensive towers rose above these very buildings.

“The first towers were built in the eleventh century. By the twelfth there were over a hundred. ‘Gent’ e avara, invidiosa, e superba.’ That, Dante said was the reputation of the Florentines…. ‘Stingy, envious and proud,’ the Florentines were possessed by a ferocious independence and rivalry, determined to be outdone by no one. Every man wished to be first and no man could tolerate that another should be ahead of him. The towers grew steadily taller as the burghers copied the nobles and the city became a sort of multiple Babel, with many towers two hundred feet high and some even higher. Each family or group of families had a tower adjoining the house of its chief… the more powerful families had a whole series of towers clustered together, or dispersed throughout the city. After some deed of vengeance had been committed the clan would take refuge in its tower or towers, hurling stones and burning pitch down into the street at its opponents.”

The spirit of intense envy burned in the city’s communal works. They competed, not just with other cities but even with the past.

When the Duomo was ordered, in 1296, from Arnolfo di Cambrio, to replace the old church of Santa Raparata, a proclamation declared the citizen’s requirements. “The Florentine Republic, soaring ever above the judgement of even the most competent judge, desires that an edifice shall be constructed so magnificent in its height and beauty that it shall surpass anything of its kind produced in the times of their greatest power by the Greeks and Romans.”

The pride of the city of Florence and of its leaders certainly extended to its great artists. “Pope Clement VII (Giuiio de Medici) confessed that whenever Michelangelo came to see him, he, the Pope, made haste to sit down and to invite him to do likewise, because, if he were not quick about it, Michelangelo would take a seat anyway, without asking permission.” It’s a wonder that the Pope could bear his presence for long. Michelangelo never bathed and rarely changed his clothes. The Stones of Florence is filled with difficult details and is well worth the reader’s efforts for that reason, but the author is also wrestling with large and difficult concepts.

“The Florentines invented the Renaissance, which is, in fact, to say they invented the modern world – not, of course, an unmixed good. Florence was a turning-point, and this is what troubles the reflective sort of visitor today – the feeling that a terrible mistake was committed here, at least at some point between Giotto and Michelangelo, a mistake that had to do with power and megalomania, or gigantism of the human ego. You can see, if you wish, the handwriting on the walls of Palazzo Pitti or Palazzo Strozzi, those formidable creations in prepotent stone, or in Michelangelo’s ‘David’, in love with his own strength and beauty. This feeling that Florence was the scene of the original crime or error was hard to avoid just after the last World War, when power and technology had reduced so much to rubble. ‘You were responsible for this,’ chided a Florentine sadly, looking around the Michelangelo room of the Bargello, after it was finally reopened. In contrast, Giotto’s bell tower appeared an innocent party.”

Readers who believe in the fundamental darkness of human nature will find their opinions confirmed by McCarthy’s book and those who believe in mankind’s basic goodness could be dismayed or even baffled by The Stones of Florence. Her assertion about the shade of Cataline haunts her description of the grand piazza in the heart of the city:

“More than any other piazza in Italy, the Piazzo della Signoria evokes the antique world….. this square, dominated by the Palazzo Vecchio, which was the seat of government, has an austere virile beauty, from which the grossness of some of the large marble groups does not detract. The cruel tower of the Palazzo Vecchio pierces the sky like a stone hypodermic needle; in the statuary below, the passions are represented in their extremity, as if strife and discord could be brought to no further pitch. In any other piazza, in any other city, the line-up of murderous scenes in the Loggia dei Lanza….. would create an effect of terribila, or of voluptuous horror, but the Florentine classical spirit has ranged them under a porch of pure and refined arches, which appear to set a ceiling or limit on woe.”

The book is well illustrated, but is easier to follow because of the Internet. This reader made frequent use of search functions to find additional images for the many works of art and architecture referenced by the author. The Stones of Florence is dense and discursive. Ideas are not expressed like bumper stickers but with full paragraphs and they are developed over many pages. Although not perfect, the scholarship is excellent nonetheless. Any reader wishing to have a fuller understanding of the centuries that produced unsurpassed art and human progress in a particular, difficult, wondrous place, Renaissance Florence, will be enlightened and entirely entertained by Mary McCarthy’s The Stones of Florence.