- November 06, 2014
Long before movies became targeted to specific markets there was such a thing as an all-ages movie spectacular. These fantastical movies had action and monsters for the kids and enough subtlety and romance for the grown-ups who took them to the movie palaces. The Fiction Department has two of these films I strongly recommend. 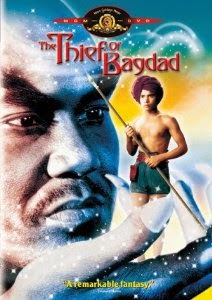 The Thief Of Bagdad (1940) was one of many lavish spectacles which the British put out during WWII to give war-weary audiences a temporary reprieve from the new, grim reality. It is escapist in the best sense of that word. Produced by Alexander Korda and featuring no less than three co-directors (including future Brit film luminary Michael Powell), it is a stunning, entrancing triumph of storytelling, music and bespoke special effects which don’t look dated but instead look charming. Hit Pause when the background scenes of Bagdad come up and drink in the glory of painted perspective illusion at its most romantic. Conrad Veidt plays the evil ruler Jaffar and Sabu plays the titular thief (any movie with Sabu is worth watching). The true leader of Bagdad, Prince Ahmad, has been cast out by Jaffar. He must form an alliance with the thief, a princess and a genie (exuberantly played by Rex Ingram) to reclaim his rightful throne and restore justice to his people. The spectacles that audiences sought are here in abundance-genies, flying horses and carpets, a multi-armed automaton, a giant spider and more. It’s no accident that The Thief of Bagdad has placed again and again in Best Fantasy Movies of All-time lists. 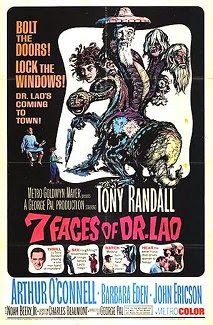 7 Faces Of Dr. Lao (1963) is a relatively sunny adaptation of the merciless dark fantasy classic The Circus Of Dr. Lao by Charles Finney. To do that book justice, you’d have to make a movie with a very strong R or NC-17 rating. But of course the realities of Hollywood in the early Sixties made that kind of thing unimaginable. Even the equivalent of a PG effort would’ve been unlikely. Tony Randall plays the good doctor and five other roles brilliantly. A group of greedy developers threaten to dupe the citizens of a small western town in the early 20th Century. Dr. Lao comes to town at just the right moment to wake people up to the swindle, but he does much more than that. He confronts people with their greed, their repressed sexuality, their racism, their depressingly low expectations and horizons. He does it by himself and with his circus but, more importantly, he does it by reaching into people and igniting things in them that they’d forgotten or repressed. In mythological terms, he’s part trickster, part savior. A scene with Barbara Eden playing a sexually repressed librarian (a type I have not even remote experience with) melted by a dancing Pan is particularly memorable. The film won a first-ever Oscar for make-up. There had never been a make-up Oscar before the movie, because the skill wasn’t considered worthy of one, but 7 Faces changed all that. Tony Randall later distanced himself from the movie, saying it wasn’t anything he was proud of, but he’s wrong. He’s amazingly assured here. It’s far and away the best thing he ever did. It might not be equal to Alec Guiness tackling eight roles in Kind Hearts and Coronets, but that’s like saying Kanchenjunga is no Everest. So what? I’ve seen it at least eight times over the last 40-odd years and I’ll surely see it several more. I can’t believe this movie isn’t more popular than it is.