Big Range of CDs at the Library

- August 19, 2015
I’ve selected a spectrum of music CDs from Central Library’s Arts, Literature and Sports Department. These are ones I’ve checked out and/or own myself. Some I own because I was so impressed by the checkout experience. The library has a wide selection and that’s helped to broaden my horizons. If you want to explore America’s music or be a xenophile, the library’s a very good place to start. 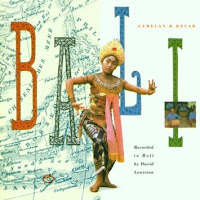 Bali / recorded in Bali by David Lewiston, 1989Nonesuch was the first U.S. label that made world music records for the average listener, not just the specialist. This one, recorded in the '80s by David Lewiston, who did more than anyone to make Indonesian music accessible, is a very good modern recording with excellent performances from a good range of the island’s traditional music. There’s no faster music in the world than Balinese music (if you want a contrast, there’s nothing slower than dream-paced Javanese music). Like much traditional Indonesian music, Balinese music features tuned gong ensembles, which sound like nothing else on earth. To Western ears, the sounds on this record are otherworldly, timeless, and mysterious. But they can also be quite vigorous. 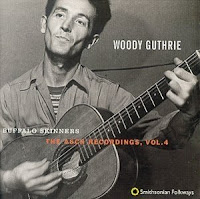 Buffalo Skinners / Woody Guthrie, 1999
This CD is part of a box set Smithsonian/Folkways issued that sums up the definitive work Guthrie and the label did together in the 1940s. When I started on this review, I couldn’t remember what a buffalo skinner was, but I was struck by "Go Tell Aunt Rhody," a bedtime song my grandmother sang to me when I was a child. Of course, Woody can’t do it as well as her, but I shouldn’t have expected the moon. It’s a rich take nonetheless. Listening to Guthrie is to connect with a now-vanished America of dust-ruined farms, hobos, rail riders, and the 19th century folk tradition and before. He does deliver the moon in places here. 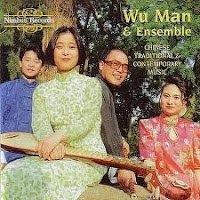 Chinese Traditional and Contemporary Music / Wu Man & Ensemble, 1996
No, this isn’t the music you hear in your local Chinese restaurant. Nothing bland, cheesy, or background here. Wu Man, who’s appeared in Birmingham before, is one of the masters of the pipa, a plucked Chinese lute. Another instrument played here by the Ensemble is the erhu, a fiddle that you may have heard in Chinese movies when the director wanted to suggest loneliness, loss, or regret. There’s also the zheng, a zither and ancestor to the Japanese koto. Also: various reeds, including one with a kazoo-like sound. A good intro to the thousands-years-old Chinese tradition. 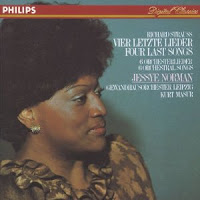 Four Last Songs, Six Orchestral Songs / Richard Strauss, 1983I first heard one of the Four while watching the opening credits of the movie Wild At Heart. I knew I had to hear it again and own it, so struck was I by the sound. Later I heard David Bowie’s a big fan of these songs. They’re all here and sung by Jessye Norman, and you’re not going to get a better performance than the one by her. These opulent, late-Romantic pieces for voice and orchestra are evocative in the sense that you can never get to the bottom of them. Listen and know what it is to be fully engaged in this world with its longing, sorrow and wonder and at the same time utterly leave that world. Engagement and transcendence—a potent combination. 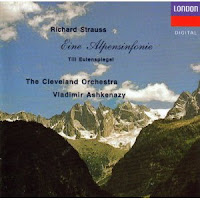 Eine Alpensinfonie / Richard Strauss, 1989
The first time I heard this piece I fell asleep and dreamed I was in the high mountains. It works well when you’re awake, too. Feeling like you’re there is part of the point, of course, in this Alp symphony. Like the last Strauss entry, this record will transport you to another world, a world your imagination and desire will be able to create. It’s fairly easy to write about this, but it’s very hard for a composer to initiate that process. Strauss could do that and the Cleveland Orchestra is more than up to the challenge. 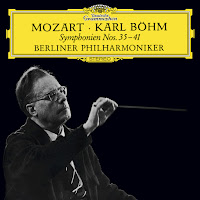 Symphonien nos. 35-41 / Mozart, 1995
Mozart’s late symphonies are pinnacles of Western art and the last two, 40 and 41, stand tallest among them. Each of these works suggests whole worlds, with dance, tragedy, foreboding, joy, and transcendence at play. Fearless exploration was what Mozart was doing in these compositions and they point directly to the Romantic era. I’ve been listening to these symphonies since high school and I know I’ll never tire of them; always hear new things in them. Bohm and the Berliners' take on them is top-level music. 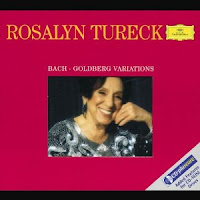 Goldberg Variations / Bach, 2000
Glenn Gould is the most famous interpreter of these solo piano pieces, but I think Rosalyn Tureck is equally good. I have a friend who was lucky to get to attend a seminar under Tureck and he agrees with the assessment of one critic that she was the High Priestess of Bach. I have no issue with that title. In her hands these lithe pieces shine with a haunting radiance. Bach was at his stately and universal best in the Goldberg Variations and, as Bach offered up everything he wrote to the Almighty, you can easily hear that this is music worthy of God. More to my needs, it’s music that never fails to make me feel like there is something worth living for. 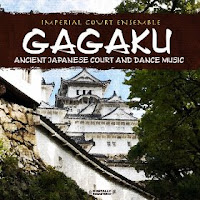 Gagaku: Ancient Japanese Court and Dance Music / The Imperial Court, [1994?]
Gagaku is the oldest form of Japanese classical music and it has older roots in China. Like so many things the Japanese have adopted from China, it has become quintessentially Japanese. Originally it was formal imperial court music, but Japan no longer has anything like that kind of court. Instead of mostly suggesting the eternality of the court, it now mostly suggests to me the eternal itself, worlds beyond our world, not surprising when you learn that gagaku is associated with Buddhism. If you want to leave this world behind without actually dying, listening to gagaku is a good way of doing it. 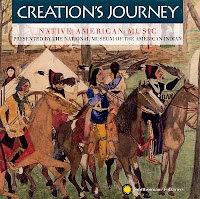 Creation’s Journey: Native American Music / presented by the National Museum of the American Indian, 1999
This one’s here partly because it’s so hard to find good American Indian music on CD. Too much is New Age or some watered-down dreck and that’s a shame considering that the real stuff should be a valued part of every American’s heritage. The problem is one of access. This is the best intro I’ve ever heard. It has a good cross section of music, with many tribes and regions in evidence. Solid, fine performances abound and there’s not a weak track on it. It was a lot for the museum to take on, but they did it on one CD as well as anyone could’ve reasonably hoped for. 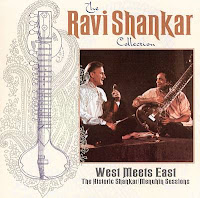 West Meets East: The Historic Shankar / Menuhin Sessions, 1999
Back in the sixties, before there was even the term "world music," Ravi Shankar, India’s premier sitar player, and Western classical violinist Yehudi Menuhin started recording these pieces. They bridged the two classical worlds and thus made a good way into India’s art heritage for those who might otherwise find it inaccessible. Unlike so many fusion attempts, it actually works because it doesn’t do any dumbing-down or homogenizing. 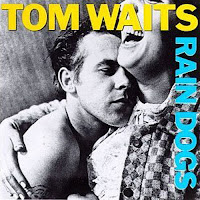 Rain Dogs / Tom Waits, 1985
According to Tom Waits, rain dogs are dogs that’ve been through a big rain and have lost their scent and are therefore left rootless and wandering. The subjects of these tunes are their human equivalent. This record was made after Waits jettisoned his fifties beatnik musical style and adopted Kurt Weill and Harry Partch as guiding lights. It made his music more original and interesting and quirky. There’s Tom himself on the cover, washed up onto the arms of some understanding woman.