Laughing through the Summer (or End of Summer) Blues

The oldest documented joke dates back to 1900 BCE. A Sumarian proverb a bit lost in translation, it still bares much resemblance to today's low-brow humor. Babylonians even had Yo Momma  jokes. Clearly, the need to giggle and tease is nothing new. Wordplay, irony, and sarcasm are found even in the Bible.

Comedic plays were common even in ancient Greece and comic books as we know them date back to the 19th century. 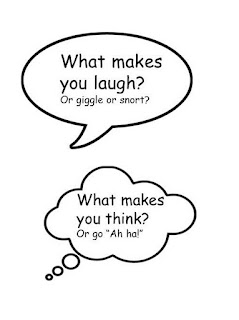 If you want to learn about the history of humor. We've got you covered.
A history of American graphic humor by William Murrell
Stop me if you've heard this : a history and philosophy of jokes by Jim Holt.
American humor : a study of the national character by Constance Rourke

If you're just in the mood for a laugh,  we've got that too. From records and writings of Jeff Foxworthy, Richard Pryor, Tina Fey, and George Carlin to National Lampoon, Peanuts, and Foxtrot, we have items to help you laugh away the summer (or end of summer) haze.