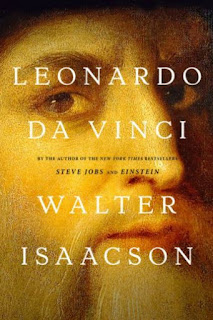 Our enduring image of Leonardo is one he created for himself— the discerning sage with his long hair and beard. The pleasure of Walter Isaacson’s Leonardo da Vinci is that we get glimpses of the beautiful, endearingly vain man who, through his insatiable curiosity and unmatched visual acuity, evolved into the authentically wise sage we see in his self-portraits. Biographers, including Sigmund Freud, have long been fussy about Leonardo’s homosexuality, but Isaacson’s Leonardo is an unselfconscious gay man, athletic, with long golden curls and widely remarked upon for his androgynous beauty, who drew like an angel even before he was apprenticed in Florence at the age of twelve. In his youth, unusually, he wore his robes, often pink or purple, above the knee. It is said we get a glimpse of the young Leonardo in his master Verrocchio’s statue of David, standing triumphant over the head of Goliath. Even then, as a very young man, Leonardo was respected for his painting, but he was most widely celebrated for staging wondrous ephemeral public spectacles on behalf the rulers of Renaissance Italian city-states. He was an artist and an impresario, the quintessential Renaissance man who often bought caged birds to set them free.

We do not know a lot about Leonardo’s life, or how he felt, but we know more about what he thought than nearly anyone who ever lived. He kept meticulous notebooks from the age thirty until he died. Over 7,000 pages of these notebooks have survived five centuries of hazards. The strength of Isaacson’s biography is his chapter-by-chapter discussion of Leonardo’s scientific and artistic discoveries as recorded in these notebooks. Leonardo’s autopsies revealed to him secrets of the inner eye and the human heart. Leonardo describes his discoveries in the science of perspective. He speculates about sneezing, the flight of birds, and the reason the sky is blue. The notebooks also tell us the color, cloth, and style of the clothes Leonardo gave his beautiful young boyfriend, who was the subject of many exquisite doodles that coexist with detailed three-dimensional drawings of gliders and bird wings. These notebooks with their priceless scientific lore were sadly unpublished. Leonardo, the perfectionist, was reluctant to declare anything finished, so that many of his scientific findings were only re-discovered centuries later.

Isaacson’s great subject is genius. He has given us biographies of Benjamin Franklin, Albert Einstein, and Steve Jobs, men we call Renaissance men, whose insatiable curiosity ranged far beyond the confines of one single field of knowledge. We come to understand how Leonardo’s paintings are great because of the natural lore he brought to bear, the complex play of muscles behind a smile. Learned, accomplished, and beautiful, Leonardo was a jewel of princely courts and was, from time to time, sent from one ruler to another as a sign of respect. They indulged Leonardo, and he seems to have lived his life, from his beautiful youth to his learned old age, doing exactly what he wanted to do.

Leonardo lived most of his life in Florence, Milan, Rome, and, ultimately, in a Loire valley chateau outside of Paris where he died, beloved, in the arms of Francois, the King of France, under the mysterious gaze of his painting, the Mona Lisa, which he had been perfecting for many years.
By Tressa Fancher

Unknown said…
Wonderful review. Thanks!
I may even read the book.