Southern History Book of the Month: Abstracts from Alabama Newspapers 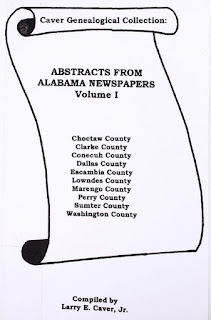 At this time of the year when the weather turns colder, I really enjoy those mornings when I can linger over my coffee and read the newspaper. But newspapers are more than just entertainment—if you’re doing genealogical research and not checking newspaper records, you can be missing out on some fantastic information. Abstracts from Alabama Newspapers is a two-volume set of notices from newspapers in fourteen different Alabama counties. We’re so accustomed to instant news sources that it’s easy to forget how much our ancestors depended on the newspaper for their information about what was going on in the world. Newspapers can contain notices of births, deaths, and marriages and this can be a lifeline for family history research in times before vital records laws became the order of the day. A local newspaper might also contain property transactions, orphans’ court records, or even medical warnings like this extract from the Southern Advocate:

The small pox is said to be raging on the road from Selma to Montevallo . . . it is said that it has been caused to spread much more than it would otherwise have done, by means of inoculation. A number of individuals who had been exposed to the contagion of the small pox were vacinated (sic) with matter, probably of a defective character . . .

We who are living in a time when smallpox has been all but eradicated and there are reliable vaccines for many illnesses can hardly imagine how your life could depend on being warned in time about an outbreak of disease, and even then the warning might not save you. But some of our ancestors still managed to beat the odds, as we see in the Athens Post of March 5, 1868: "Mrs. Sallie HARRIS, living at Cedar Bluff, Cherokee County, is said to be the oldest person now living in Alabama. She is 113 years old. She is a native of Edgecomb County, North Carolina."

A lot of the reports are not remarkable for their journalistic objectivity. The death notice for John M. Parkman in the Athens Post refers to him very frankly as “the swindling President of the Selma bank.” One would hope to leave behind a legacy more like that of Mrs. Mary Maull, who is described in the Watchman as “kind to all . . . she gathered around her many firm and devoted friends. For firmness of character, energy and industry, she had few equals.”

If you’re interested in newspapers, they are really in the spotlight at BPL right now. Don’t miss our Alabama Illustrated exhibit in the Fourth Floor Gallery, which features news stories pertaining to Alabama from various 19th century newspapers and will be on display until Friday, February 2, 2018.

You should also reserve your spot for the “Nosing Around in Newspapers” class in Southern History’s Beyond the Basics of Genealogy series. This class will take place on Sunday, March 25, 2018, and will focus on using newspapers in genealogy research and navigating our database Newspapers.com—Southeast Edition. This is a relatively new database for us and we are excited to be able to offer this resource to our genealogical researchers.

Enjoy the season, and may you gather around you “many firm and devoted friends.”