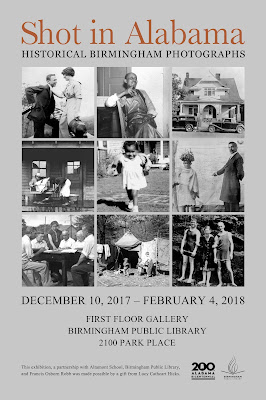 What: Shot in Alabama: Historical Birmingham Photographs exhibit
Where: Central Library, First Floor Gallery near the display windows
When: December 10, 2017-February 4, 2018
Details: Free and open to the public during library hours. On Sunday, January 7, Shot in Alabama author Frances Robb will give a gallery tour of the exhibit at 2:30 p.m., followed by a lecture at 3:00 p.m. in the Fiction Department.

If you like looking at historic photographs, make plans to make your way to the Birmingham Public Library (BPL)’s Central branch to view its new exhibit Shot in Alabama: Historical Birmingham Photographs. The exhibit is open to the public through February 4, 2018, in the First Floor Gallery.

The photo display features nearly 30 pictures from the book Shot in Alabama: A History of Photography, 1839-1941, and a List of Photographers by author Frances Osborn Robb, released by the University of Alabama Press in 2016. Shot in Alabama is Robb's visual and textual narrative of Alabama's photographic history from 1839 to 1941.

BPL’s exhibit highlights the Birmingham photographs, many of which come from BPL’s Archives Department. Students from Altamont School in Birmingham designed the exhibit and wrote the content for the 30 photograph labels. Robb, author and curator of the exhibit, will give a lecture about Shot in Alabama the book in the Central Library’s Fiction Department at 3:00 p.m. on Sunday, January 7, 2018. Robb will also lead a gallery tour of the exhibit at 2:30 p.m. prior to her talk.

Presented chronologically, Robb depicts Civil War photography, portraits of the end of the 19th century, the Great Depression, pre-World War II illustrated photography, and more. Robb also chronicles the work of hundreds of photographers—black and white, amateur and professional, women and men. The Shot in Alabama book also has an appendix listing 1,400 photographers by name, working dates, and location.

A Birmingham native, Robb has spent 25 years researching Alabama photography while serving as a consultant on the state's cultural history and historic photography for museums, archives, and libraries.

The Shot in Alabama book is available for $60 in the BPL Friends Bookstore, located on the first floor of the Central Library. Proceeds from sales benefit BPL.
By Tressa Fancher