Government Employee in the Family?

Did you have an ancestor who worked for the federal government, was a small town postmaster, or an officer in the military? If so, let me introduce you to a terrific resource that you’re probably not using. Published at two-year intervals from 1816–1959, the Official Register of the United States is a great jumping-off point if you know or simply suspect that your ancestor worked for the government.

For most of its history the Official Register listed federal employees by department and included information about their position, salary, place of birth, and where they were posted. Some years provide more information than others. For instance, in 1825 two clerks in the Treasury Department, Aaron Vail and William S. Smith, have a special notation about their birthplace and the nationality of their parents: 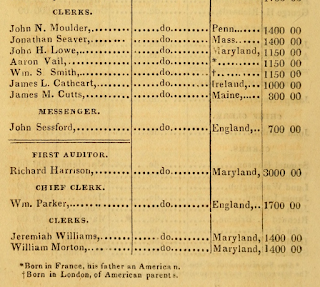 There is also this note from 1825 stating that Joseph Nourse, the first Register for the Treasury, was actually born in England but came to America with his parents in 1769. Information like this is invaluable to a genealogist and can take your search in many different directions.

Sadly, such gems are not found in later editions of the Official Register. As the government grew and employed more people (particularly the Post Office), the Register became more expensive and unwieldy to produce. However, its long run makes it a real treasure when it comes to looking for ancestors who may have worked for the government during the 19th and into the mid-20th centuries.

The Official Register also provides a glimpse into the great variety of jobs and skills that were necessary to keep our government humming. Some of the more curious jobs were Furnace Keeper under the Library of Congress (W.R. Simmons held this position in 1861. He made $720.00), lamplighters, wagon makers, and many more. In the early years, almost all of the employees were men. The earliest entries for women are in the 1830s. They are primarily working as postmasters and lighthouse keepers in small, remote locations.

Most issues of the Official Register have been digitized and are readily available on sites like Hathitrust.org or from the Government Publishing Office’s online catalog govinfo.gov. For more information on the history of the Register and how to maximize it for genealogical research, follow the links below. I hope you’ll enjoy spending time with this useful and fascinating resource. 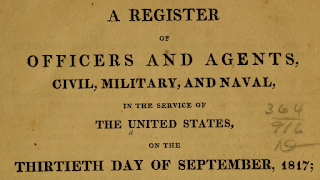