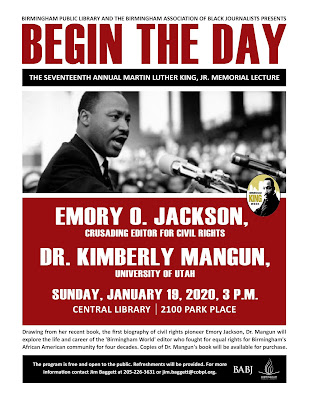 Her lecture will take place in the Central Library’s Arrington Auditorium at 3:00 p.m. on Sunday, January 19, 2020. Drawing from her recent book, the first biography of civil rights pioneer Emory Jackson, Dr. Mangun will explore the life and career of the Birmingham World editor who fought for equal rights for Birmingham's African American community for four decades. Copies of Dr. Mangun's book will be available for purchase.

The MLK Memorial Lecture will be held the day before the MLK national holiday which will be observed on Monday, January 20, 2020. All BPL locations will be closed for the holiday.

Mangun is a University of Utah professor who studies the African American press and representations of women, race, and ethnicity in communication history, subjects she became interested in while in graduate school. She has written two respected civil rights books.

Mangun joined the University of Utah Department of Communication in fall 2006 after earning her PhD from the University of Oregon School of Journalism and Communication. Before pursuing her graduate degree, Dr. Mangun had a long career as a managing editor for alternative media in San Diego, Santa Cruz, California, and Eugene, Oregon. She also published an outdoor recreation magazine in Oregon. In addition, Dr. Mangun has done public relations and newsletters for major companies such as Plantronics, Inc., and considerable freelance writing for newspapers and magazines.

Her award-winning book, published by Oregon State University Press in 2010, examined the career of Beatrice Morrow Cannady, an editor and publisher who advocated for civil rights in Portland, Oregon, from 1912 until 1936. Dr. Mangun’s book was used as the basis for an Emmy-nominated Oregon Public Broadcasting documentary that has continually aired since its premiere in May 2007. Also as a result of her research, the North Clackamas School District in Oregon (Portland area) voted in fall 2018 to honor Cannady by naming a new elementary school after her. The school, the first in the district to be named after a woman, is slated to open in September 2019.

Dr. Mangun's latest book, Editor Emory O. Jackson, the Birmingham World, and the Fight for Civil Rights in Alabama, 1940-1975, was published by Peter Lang in July 2019. The cultural biography focuses on Jackson's 35 years of civil rights advocacy for blacks. Jackson wrote from a black perspective about topics traditional media ignored during the Jim Crow era, covering the fight for voting rights, education, and other civil rights issues.

Mangun's biography tells the story of Birmingham World editor Emory O. Jackson. During his 35-year career in Alabama, he waged numerous sustained civil-rights campaigns for the franchise, equal educational opportunities, and justice for the victims of police brutality and bombings. The semiweekly newspaper was central to his advocacy. Jackson wrote editorials and columns that documented injustices against blacks from 1940 through 1975.
By Roy L. Williams