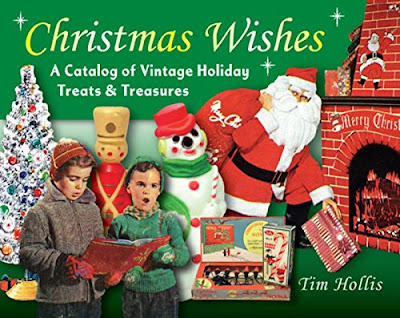 Remember when you were a kid and you’d hear adults saying sometime in November, “Oh, Christmas will be here before you know it!” And you’d think they were crazy, because Christmas was obviously still so far away it might as well be on another planet. This was the time of waiting, seeing decorations start to appear, poring over holiday catalogs from Sears and J.C. Penney, and checking the TV schedule so you wouldn’t miss The Grinch or Rudolph or Charlie Brown.

If you want to recapture that feeling of being a kid again at Christmas, take a look at Christmas Wishes: A Catalog of Vintage Holiday Treats & Treasures. You’ll be smiling and feeling like an excited six-year-old in no time. Birmingham’s own Tim Hollis has lovingly assembled a chronicle of Christmas memories that will resonate with any of us who remember growing up in the sixties. It was the time of Lite Brite and the Easy-Bake Oven, View-Master projectors and reel-to-reel tape recorders (a gift my brother received and I wish he had kept it), and tasty treats that we got to sample only once a year. Hollis devotes whole chapters to these topics, complete with lavish illustrations that will carry you back in time. However, there is usually a touch of refreshing snark in his descriptions so there is no danger of too much sweetness in the nostalgia. He points out that The Story of the Christ Child (Wonder Books, 1953) tries to pad out the text to appeal to children and achieve the necessary page count:


This was obvious from the paragraph that began the first page. “A long time ago, in a town called Nazareth, there lived a beautiful maiden named Mary. Mary was very happy. She loved her garden and spent many sunny days caring for her flowers and feeding the birds and little animals that scampered in her garden.” Only three sentences, and already we have been told more about Mary than can be found in the entire Bible.

It’s also nearly impossible for my generation to imagine a holiday season without Rudolph the Red-Nosed Reindeer and Frosty the Snowman, but Hollis devotes an entire chapter to “Rudolph and Frosty and What They Begat.” Did you know that Rudolph’s name in the first draft was Rollo? Or that author Robert L. May originally imagined Rudolph’s superpower as huge glowing . . . eyes. That might have been a little frightening, so now it’s his nose that glows. Frosty the Snowman was likewise successful almost from the moment of his creation in the hit song by Steve Nelson and Jack Rollins in 1950. We all remember that he eventually got his own television special, but even before that production there were Frosty music boxes, pull toys, banks, night lights, and “for those who had had enough of Frosty, a punching bag with his image emblazoned where one’s fist should go.”

Some of us may remember, like Hollis, certain distinctive decorations from the era, many of which are being re-created (or dug out of the attic) because of the trend for mid-century modern design. Remember the silvery aluminum Christmas tree that would reflect the light of the color wheel? Bubble lights on the tree are also fondly remembered; my grandparents had some on their tree but after accidentally touching one I understood why my mom refused to have them in our house—those little suckers got HOT!

There is much to savor in Christmas Wishes. If you’re feeling rushed and stressed, this is the perfect book to browse through while enjoying a much-needed rest and a cup of hot cocoa. Unwind, relax, and relive the time when the Christmas was all about fun.