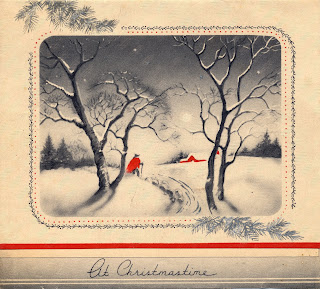 The custom of sending cards and letters during the Christmas season became popular in the early nineteenth century. In Victorian England children wrote, in their very best handwriting, greetings to their parents. And adults, more and more, were writing Christmas letters to one another.

An Englishman named Sir Henry Cole (founder of the Victoria and Albert Museum) is credited with sending the first printed Christmas cards in 1843. The card depicted a happy family, each holding a glass of wine, and the caption read, “A MERRY CHRISTMAS AND A HAPPY NEW YEAR TO YOU.” Cole had asked an artist to design this special hand colored lithograph card that he could send to friends. The printer who produced Cole’s card ran off extra copies that he sold for one shilling.

Richard H. Pease, a printer from Albany, New York, is believed to have sent the first specially printed American Christmas card in 1851.

The first company to mass-produce and sell Christmas cards was Charles Goodall & Sons of London in 1862. By the late nineteenth century and early twentieth century Christmas cards had become a fixture of the holiday season. 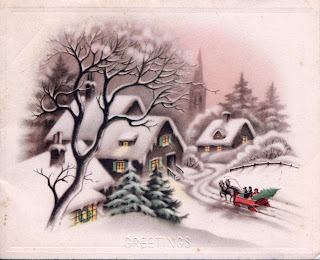 And almost as long as Christmas cards have been a source of delight for holiday revelers, they have been the cause of intense labor for those who deliver the cards. As early as 1822 the postmaster of Washington, D.C., complained that he had to employ an additional 16 mailmen during the Christmas season to handle all the greetings that local citizens sent to one another. He asked, in vain, for a law setting a limit on the number of cards any one person could send. “I don’t know what we’ll do,” he wrote, “if this keeps on.” It has kept on. And even in the world of social media Americans still send two billion Christmas cards each year (along with 500 million e-cards).

Several vintage Christmas cards from the late 1800s and early 1900s are preserved in the Birmingham Public Library Archives, including the ones pictured here.
By Tressa Fancher