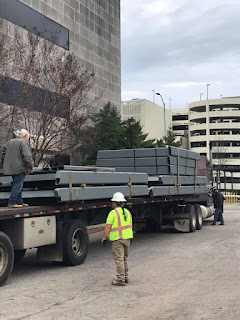 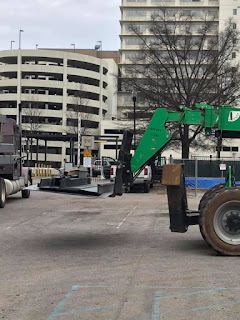 On Friday, December 27, an 18-wheeler delivered the stairs that will replace escalators that have been  broken down in the Central Library since 2014. Contractor Taylor & Miree has removed all four stories of the escalators since construction began in mid-September.

Installation of the stairs will begin in January, with Central Library's  East Building expected to re-open by mid-March 2020. Patrons can still take advantages of services such as checking out materials, using public computers and other services by entering the Linn Park entrance of the Linn-Henley Research Library, known for its famous historic murals.

The BPL Friends Bookstore also remains open from 11:00 a.m. to 4:00 p.m. Tuesdays through Saturdays.  Creig Hoskins of Birmingham was architect on the stairs project.

In August, BPL released images of what the Central Library Monumental Stairs Project replacing the escalators will look like once completed.

Stay tuned to the BPL Facebook page and BPL website for more photos and information over the next few months as the stairs are installed.