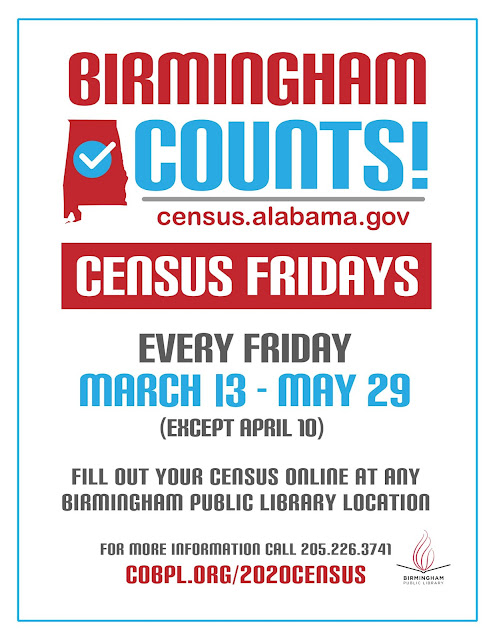 Did you know Alabama cities such as Birmingham could lose out on potentially millions of federal dollars that could be used for schools and public services such as repairing roads due to undercounting in the 2020 U.S. Census? This counting of the nation's population, done every decade, plays an  important role in determining federal funding.

The Birmingham Public Library is stepping up to prevent that by providing residents with free access to its public computers and helping ensure a complete and accurate count of the Birmingham metro population in the 2020 U.S. Census by launching its Birmingham Counts! Campaign this week.

Every Friday beginning March 13 through May 29 - with the exception of Good Friday when all city libraries are closed  - 18 BPL locations will host Census Fridays, a day set aside in which patrons will be able drop by any Birmingham Public Library during operating hours and use public computers to fill out their Census questionnaires.

The Birmingham Public Library will play a major role in securing an accurate count in 2020 because this year for the very first time, residents will be able to complete the Census questionnaire online on the Census Bureau’s website.

“Our library computer resources – PCs, laptops, tablets, Chrome books and free Wi-Fi, will be of special importance in our Birmingham Counts! Campaign,” said Jim Murray, chair of the BPL Census 2020 Committee. “We encourage our patrons to use library computers to get to the questionnaire, especially those patrons who do not have any other way to access the Internet.”

In Birmingham, there are some communities where only 65 percent of residents responded to the U.S. Census in 2010. Many of the 19 Birmingham Public Library locations are in undercounted areas.

Although completing the Census questionnaire is available for BPL patrons any day, special emphasis on this issue will take place on Census Fridays.

Every 10 years, the U.S. Census form is sent to every household in the country. The form contains 10 simple questions. Having every citizen counted is important because Alabama can obtain $13 billion in federal funding that can be used to improve services for our state and individual cities like Birmingham. This money means better health care, more funding for schools, roads, housing assistance, better job opportunities, and more.