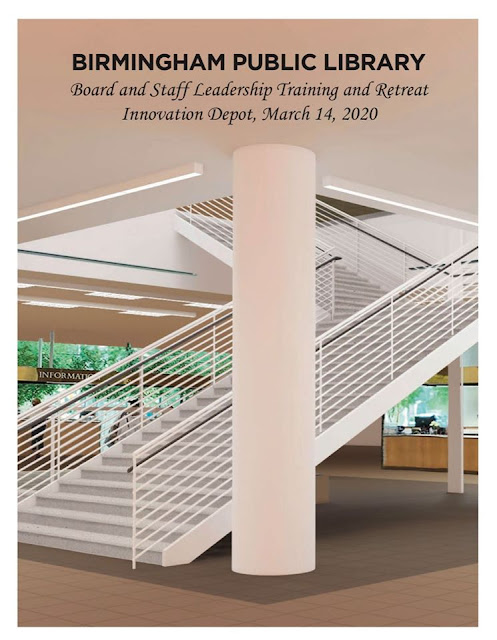 The Birmingham Public Library is hosting its 2020 Board Staff and Leadership Training Retreat this Saturday, March 14, at the Innovation Depot downtown.

“A city with a great Central Library is truly a great city,” said BPL Executive Director Floyd Council. "Unlike most cities, Birmingham has the best of both worlds with our beautiful historic Linn Henley Research Library which opened in 1927 and our Central East Library which was connected by a third floor sky-bridge which opened in 1984.”

The Central Library is currently undergoing a $2 million dollar interior redesign project that includes the replacement of the escalators with beautiful new monumental stairs, Council said.

The first phase of this project will also include the replacement of flooring and the relocation of the fiction collection to the third floor. Additional renovations are planned when funding is secured. The redesigned first floor will feature a programing area with a community gallery and seating for 500 for our open auditorium programs, Council said.


The leadership retreat will begin with the BPL Board of Trustees March 2020 board meeting (open to the public). The board retreat is restricted to confirmed board trustees, Friends Foundation of the Birmingham Public Library and BPL staff leadership.

The Leadership Retreat Agenda is as follows:

Harrington is an attorney and shareholder of Robinson, Bradshaw & Hinson, P.A, with a practice focus on business disputes. He has held several leadership positions with non-profit and public organizations, including chair of the board of the Levine Museum of the New South and President of the Mecklenburg County Bar. Harrington earned his B.A. and J.D. from Duke University

See more about Harrington and his passion for supporting libraries in this presentation, “Why I Give”
By Roy L. Williams