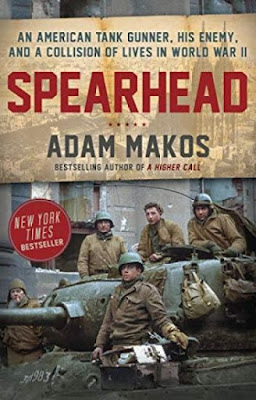 By coincidence this morning, I finished listening to the audio version of Spearhead by Adam Makos.

March 6, 1945, was the date of the Battle of Cologne during World War II. Today is the 75th anniversary of this tank duel. A new American T26 Pershing tank destroyed a deadly German Mark V Panther tank near the Cologne Cathedral. Almost by accident, both tanks were gun tube to gun tube. Fortunately, the American gunner, Clarence Smoyer, fired first and destroyed the celebrated Panther.

Spearhead relates the story of American tank crews in northern Europe in 1944 to the end of the war. The American tanks were known as Coffins on Wheels. Casualties were high, with over 850 crew members killed and over 800 Sherman tanks destroyed during the war.

Spearhead is available for reserves in book, e-book, and audiobook formats.

Link of interest:
The ‘Hero of Cologne’ receives his Bronze Star 75 years late
By Tressa Fancher