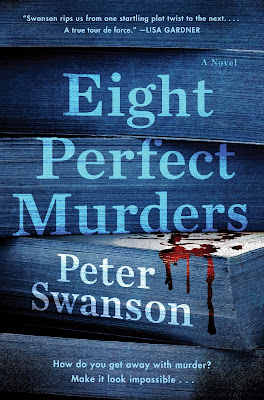 Mild-mannered bookseller Malcolm Kershaw’s life is about to take an interesting turn. Years ago when he was a new employee at the Old Devil’s Bookstore in Boston, he wrote the inaugural post for the store’s new blog. The post, titled “Eight Perfect Murders,” was Malcolm’s homage to the best, most clever murders in all of crime fiction. Fast forward to the present and Malcolm, now a co-owner of the Old Devil’s, is being asked to assist the FBI in a rather unusual investigation. It seems that several recently committed (and unsolved) murders bear a striking resemblance to those on Malcolm’s list. Is the list serving as a blueprint for the ultimate copycat killer? Can Malcolm, with his encyclopedic knowledge of crime fiction, help the FBI connect the dots?

Of course, poor Malcolm can’t help but wonder if the FBI actually suspects him of the crimes. Although he has several air-tight alibis, Malcolm is no innocent. As is slowly revealed to the reader, Malcolm’s past consists of much more than reading and selling books. The more he learns about the victims, the more he realizes these murders must be based on his list and that someone’s trying very hard to get his attention.

Spoiler Alert! Don’t worry; I won’t spoil Eight Perfect Murders for you. Be warned, however, that every book on Malcolm’s list (and a few that aren’t) will be spoiled. So if you haven’t read (or seen the movie version) of the following titles and don’t want them spoiled, then this might not be the book for you:

Christie’s And Then There Were None and The Murder of Roger Ackroyd are also casually spoiled even though they aren’t on the list.

I enjoyed this book primarily for the many references to classic crime fiction and film noir. The story is narrated entirely by Malcolm and he’s not the easiest character to like. However, any mystery or film buff will have a lot of fun with Eight Perfect Murders.
By Tressa Fancher