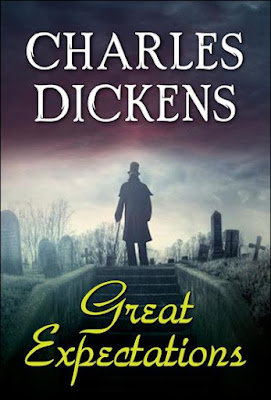 By Bill Owens| Springville Road Regional Library
Charles Dickens’ classic novel "Great Expectations" was published in serial format in his periodical All the Year Round from December 1860 to August 1861. It is a coming-of-age, first-person story set in Kent and London during the early to mid-19th century.
Pip, the main character, receives a mysterious gift from an unknown donor, which catapults him into wealthy society. The theme revolves around a fortune he expects to come.
The book opens with one of the most famous scenes in literature. Pip, wandering about the moors close to home, is accosted by a convict who threatens to kill him unless Pip brings him food.  Pip dutifully obeys. True to his word, the convict allows him to live.
Pip, upon returning to the village, relates his tale to the policemen and a group of villagers search for the convict. To their surprise, they find two convicts fighting. The police arrest both. This event foreshadows the rest of Pip’s life.
After growing a little older, Mrs. Havisham, the local wealthy recluse, asks Pip to visit. She was jilted at the altar and continues to wear her wedding dress. Mrs. Havisham wants Pip to push her around in her wheelchair and play with a young woman in her care, Estella.
Pip soon falls in love with Estella, who is both cold and aloof. As a blacksmith’s apprentice, Pip knows he has no chance with the refined Estella. However, Pip’s fortune changes after receiving a stipend of money from an unknown donor. It comes by the hand of Mr. Jaggers, a lawyer from London, who is to act as Pip’s guardian. He sets Pip up with tutors to help him become a gentleman.
Pip takes on airs after receiving the money due to his “lofty expectations.” He looks down on Joe, a blacksmith and father figure, and Biddy, a tutor. He even fails to visit when he returns to the village to see Estella, not wanting to be seen with them.
Surprisingly, it was not Mrs. Havisham, but a man named Abel Magwitch, who is Pip’s benefactor. Abel cannot return to London under pain of death but does so anyway to see what his money has accomplished in Pip. Pip, shocked, quits taking the money. However, Pip likes Abel and plans for his escape.
Pip’s last visit to Mrs. Havisham sees her remorseful. She relates how she came to be Estella‘s guardian. Stella remains Pip’s unrequited love. Mr. Jaggers brought her to Mrs. Havisham as a baby, who raised her to share her disdain for men.
Estella is the daughter of none other than Abel Magwitch, Pip’s secret benefactor. At Pip’s request, Mrs. Havisham gives Herbert a gift for his startup business. At the end of the visit, Mrs. Havisham’s dress catches on fire. Pip rescues her but at the expense of severe burns to his arms.
Mrs. Havisham is rescued but later dies of her injuries. Orlick, a handyman of Joe’s, captures Pip when he comes back for a visit. Orlick plans to kill Pip due to a longstanding grudge. Herbert and Startop, another friend of Pip’s, save him from the clutches of Orlick.
Herbert receives Mrs. Havisham’s gift and promptly starts up a business in Cairo, Egypt. He offers Pip a job which he does not take right away. Abel Magwitch was injured in his escape, aided by Pip and Herbert. Pip stays behind to nurse Abel and becomes ill himself. Joe shows up and cares for Pip.
After considering his options and with a newfound outlook on life, Pip returns to his home village and asks Biddy for her hand in marriage. However, Biddy is already married to Joe.  Pip then travels to Egypt to work for Herbert.
After 11 years, Pip returns to see Joe, Biddy, and Pip Jr.  Pip takes a walk to Satis House, Mrs. Havisham’s old dwelling, and meets none other than Estella, who apologizes for her mistreatment of him. Then Pip takes her hand, and they leave in the moonlit ruins.
Pip’s life has come full circle. Several themes run throughout Great Expectations, such as crime, social class ambition, and moral regeneration. I will take a brief look at social alienation and gentility.
Pip begins as a social outcast. He was an orphaned blacksmith’s apprentice who lived in a foggy and isolated environment. Pip says, “I was always treated as if I had insisted on being born in opposition to the dictates of reason, religion, and morality.”
Pip dreams of becoming a gentleman and when he receives money, he aggressively seeks social standing. Pip feels he has a right to his place in society because divine providence is owed to him.
In the end, after Joe nurses Pip back to health, Pip realizes that true wealth comes from demanding work and the love of those around you. The moral theme of Great Expectations is that loyalty, love, and conscience are more valuable than social climbing, wealth, and class.
Check out Great Expectations on Jefferson County Library Cooperative members, including the Birmingham Public Library, by clicking here.  You can also find other Charles Dickens novels on JCLC member libraries .
By Roy L. Williams