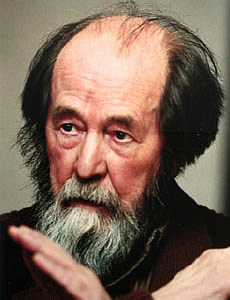 Aleksandr Solzhenitsyn is a notable Russian writer who first drew worldwide attention in 1962 with One Day in the Life of Ivan Denisovich, his novella recounting the arduous existence of prisoners in the system of concentration camps devised under Soviet dictator Josef Stalin. According to Ludmila Koehler, writing in Russian Review, Solzhenitsyn's literary debut "swept into the world like a gust of fresh wind." In the ensuing twelve years Solzhenitsyn continued to produce esteemed works, including an ambitious study, The Gulag Archipelago, 1918-1956: An Experiment in Literary Investigation, and two novels, The First Circle and Cancer Ward. Such writings, while winning acclaim in the west, further aggravated his notoriety in the USSR, and in 1974, four years after receiving the Nobel Prize for literature, Solzhenitsyn was summarily expelled from his homeland.

Soviet authorities, who had previously denied Solzhenitsyn permission to leave the country, decided that he could no longer remain there, and after briefly imprisoning him, they sent him into an exile that would last until 1994. Solzhenitsyn settled in Vermont and continued to write, meanwhile condemning the West for its materialism and dearth of spirituality. Notable among his projects from this period of exile is The Red Wheel, a multi-volume saga that recalls Leo Tolstoy's War and Peace in both its scope and its plethora of both fictional and real characters.

In 1994 following the fall of the communist regime in the Soviet Union, Solzhenitsyn left the United States and settled in Moscow. Solzhenitsyn died late Sunday of heart failure. (Source: BPL's Biography Resource Center)
By Tressa Fancher