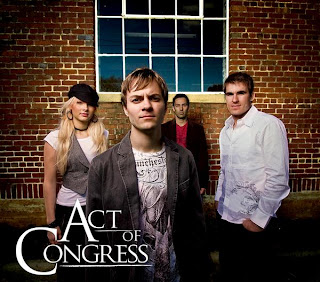 Night music in the atrium of the Birmingham Public Library is a unique experience, and the library has teamed with one of the most exciting bands in the city, Act of Congress, to bring a free concert to the library’s atrium on August 21, 2008 at 6:30 p.m.

Act of Congress is relatively new and has released an EP titled Love Remains. Their next release, Declaration, is due out in September 2008. The band is a unique blend of acoustic instrumentation and vocal harmony. Their music has been called a mix of bluegrass, rock, and jazz, sometimes called “newgrass.” They have a diverse sound and appeal to several generations of listeners.

In 2007 Act of Congress worked with Live Nation, opening for artists such as John Mayer, Toby Keith, Alan Jackson, and Brooks and Dunn.

To listen to a sample of their music and find out more information about the band, visit their Myspace page.

Act of Congress is sure to give an incredible BPL@Night performance and will have CDs for sale at the library.

Light refreshments will be served.