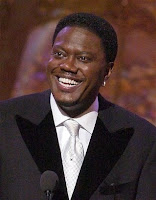 Two entertainers whose performances were enjoyed by millions died over the weekend. Comedian Bernie Mac died on August 9 and musician Isaac Hayes died on August 10.

Bernie Mac, star of The Bernie Mac Show and one of The Original Kings of Comedy was born October 5, 1958 and grew up on the South Side of Chicago. Well-known in Chicago comedy circles, his popularity landed him a spot on Def Comedy Jam hosted by Damon Wayans. Damon was so impressed with his comedy that he offered him a role in the 1992 film Mo’ Money. In 1997, Mac joined Steve Harvey, D.L. Hughley, and Cedric the Entertainer on the comedy tour, The Original Kings of Comedy. The tour was so successful that Spike Lee filmed it in 2000 for the big screen. Bernie Mac appeared in numerous films including Charlie’s Angels: Full Throttle and Ocean’s Eleven. He starred in the Peabody Award-winning television show The Bernie Mac Show from 2001-2006 on the Fox network. He also wrote two memoirs: I Ain’t Scared of You and Maybe You Never Cry Again.

Isaac Hayes, perhaps best known for scoring the 1971 film Shaft, was born August 20, 1942 in Covington, TN. A self-taught musician, Hayes performed with several bands in the Memphis music scene before becoming a house musician at Stax Records in 1964. He and songwriter David Porter wrote some of the most popular songs of the period including “Hold On, I’m Coming” and “Soul Man.” At Stax, the pair wrote songs for singers such as Sam & Dave, Carla Thomas and Johnnie Taylor. In 1967, Hayes launched his solo career and in 1971 won an Oscar and a Grammy for the “Theme from Shaft.” He also won a Grammy for the soundtrack to Shaft. In addition to his music, which has influenced generations of R&B artists, Hayes appeared in a number of movies including the 2000 remake of Shaft starring Samuel L. Jackson. He released a cookbook the same year entitled Cooking with Heart & Soul. He was the voice of “Chef” on the animated series South Park from 1997-2006. He plays himself in the upcoming movie Soul Men starring Bernie Mac and Samuel L. Jackson set for release in November.
By G. Jones