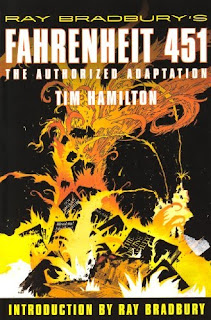 "A book is a loaded gun in the house next door. Burn it."
- Fireman Beatty, speaking to Guy Montag

Ray Bradbury's famous novel about book-burning firemen is a 20th Century classic that needs little introduction, and has in fact become something of a sacred text among librarians. One thing that reading it over again makes clear, though, is that it is not a science-fiction novel about some future dystopian society where reading is supressed by a tyranical government. It's a book about the present, whether that's 1953 or 2010, and the impulse of a lazy, distracted society not just to censor that which is uncomfortable or disagreeable, but to willingly turn a blind eye to the accumulated knowledge of centuries in favor of fast cars, big TVs, and feelings of personal security against a backdrop of constant war. Sound familiar?

It seems ironic that Bradbury would authorize a comic book version of his work, seeing that comics were what replaced books in the film based on his novel. Tim Hamilton's adaptation, however, brings home how close Bradbury's sci-fi tale strikes to the mark, and the parallels between Guy Montag's world and our own become too strong to ignore. From an artistic standpoint, what stands out most in the graphic novel is the use of color, almost exclusively those of late autumn moving into winter, just like the dying society Bradbury depicts. There's not a shred of green to be found, and the use of blue stops with the death of a key character early in the book. After that, there are nothing but muted browns, yellows and orange. And red. Lots and lots of red.

Despite all its gloom and fatalism, Fahrenheit 451 ends with a ray of hope. Fire, we are reminded, not only destroys but cleanses and renews. The book concludes with the first hints of the phoenix rising from the ashes of a willfully ignorant society, and reminds us that the main thing books do, the purpose which they serve best of all, is to remember.

Hunter said…
What a great review. Very well done, indeed, and such good writing.
8:42 AM