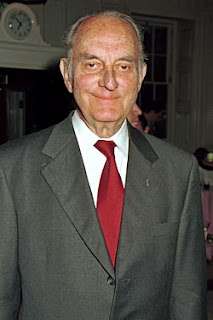 Louis Stanton Auchincloss died Tuesday, January, 26 at age 92. He was a highly prolific author of both fiction and nonfiction. James Auchincloss, the author's grandson stated that the author died Tuesday, one week after suffering a stroke.

Louis Auchincloss was born in New York in 1917. His grandmother knew Edith Wharton and his father was a Wall Street lawyer. Auchincloss was the son of privilege and therefore had the background to write novels about upper-class society. He was the son of a highly successful attorney and was able to attend the exclusive Groton School and Yale University.

Lawyer and author Louis Stanton Auchincloss was a highly prolific novelist of elite society, including works of social manners and New York's "old-money" aristocracy. In this regard, he succeeded Edith Wharton in penning insightful novels about New York's highly successful. His primary topics for novels were manners, family, money and marriages, as well as the language and arts of New York's upper-class. Reports state that Auchincloss did not praise the elite but attempted to explain their behavior. He also wrote short stories and criticism.

Auchincloss wrote over 50 books including The Rector of Justin, the novel that critics regard as one of his best works, as well as the memoir A Writer's Capital. He was also a four time fiction finalist for the National Book Award, including the nominated The House of Five Talents and The Embezzler. Auchincloss also wrote numerous other works including biographies, literary criticisms and short stories.

Many of Auchincloss' novels are multigenerational. According to the New York Herald Tribune Book Review contributor E.C Dunn, The House of Five Talents was "the story of human beings, their complexity, [and] their insecurity." The story describes an "original middle-class New York family from 1873 to 1948, from a social-climbing grandfather to his heiress granddaughter." Granville Hicks, from the Saturday Review, said that Auchincloss in Portrait in Brownstone "tells the story in a neat, dry style that repeatedly gives great pleasure."

Auchincloss continued to contribute to society and adhere to certain ideals by being a writer, attorney, community leader and family man. He was a partner at a Wall Street firm and father of three children. He was a cousin by marriage to Jacqueline Kennedy Onassis. She worked with him when she was a book editor later in life.