The Birmingham Scene Exhibition To Open November 6 at Central Library 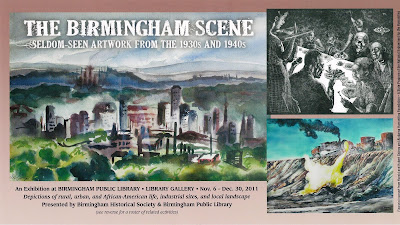 From the toughest of times—The Great Depression through World War II—comes astounding and touching artwork by local artists who depicted Birmingham daily life in landscapes, industrial locations, rural and urban settings, and African-American life. For decades, the works have been tucked away in dark corners of the city, protected but rarely displayed.

A collection of 60 pieces appear in the new exhibition, The Birmingham Scene: Seldom-Seen Artwork From the 1930s and 1940s. This exhibition is scheduled for November 6 through December 30 in the Fourth Floor Gallery of the Central Library. “We have found watercolor landscapes, and everyday scenes with people doing regular chores,” says Marjorie White, Director, Birmingham Historical Society. “There are also incredible depictions of industry—notably, a glimmering slag dump etched on aluminum—and wonderful moments from African-American life, including an award-winning woodblock cut of a Sunday supper with people passing the biscuits titled Church Supper that was once on display at The Whitney Museum of American Art in New York.

“These pieces were created by Birmingham artists who had migrated home after studying in New York and abroad, and turned their talents on this city,” White continues. “Birmingham had an Ash Can School painter in Martha Henderson Goings; pastel art from Roderick MacKenzie; and engravings by Ernest Henderson. Frank Hartley Anderson drew local industry and African-American life—and this is just the beginning of what you’ll see in this important exhibition.”

In what White calls a “read-the-labels-too” show, there’s interest culled from the artist and his/her professional vitae as well as the Birmingham history portrayed in each work. The pieces have been drawn from private Birmingham collectors, the Sloss Furnaces National Historic Landmark, the Birmingham Museum of Art, and the sponsoring organizations—the Birmingham Public Library and the Birmingham Historical Society.

“These pieces may never be seen in this manner again,” says White, who has worked with a skilled planning committee for several years to cultivate the mix. “Collectively, the bringing together of the artwork created during this fertile period of the arts—complete with Federal support of certain projects and the use of materials from pastels to paints, aluminum to woodblock—is a testimony to the work created in the midst of difficult economic and political times.

“The work is magnificent and deserves to be seen. It’s the kind of show that makes you happy,” White says.

floraphile said…
So sorry to have missed this!
10:09 AM