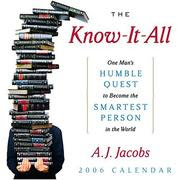 Go out, do an outrageous stunt for typically one year, write it up, make the bestseller lists. A few years ago it was all the rage. Whether or not these were trivial pursuits, the books claimed a big audience. Norah Vincent lived as a man, another female author gave up buying products made in China, and still another woman gave up all shopping. A man “lived biblically” (that’s A. J. Jacobs, too, by the way), and Barbara Kingsolver lived locavore with her family.

Norah Vincent’s account was a fascinating portal into gender and inspired me to write a blog. It also inspired me to read another stunt lit book. This time I wanted one that would be lighter and more fun. The Know-It-All seemed to qualify at first and did actually end up filling the bill. In a way, Jacobs got a jump on all the other stunters. The idea for reading the Encyclopedia Britannica (the reason for the “smartest person” in the subtitle) started with Jacobs’ dad decades ago. But dad never got past the B volume. A.J. takes on the whole 2002 edition with a mission to beat his dad. Dad is skeptical. Dad’s comments intensify the father-son rivalry, and add fuel to son’s fire. Jacobs pitches it to his wife, who tells him the project is a time-waster. Jacobs feels that with each passing day it’s a ridiculous folly: 33,000 pages, 32 volumes, a four foot tall stack of books. And he’s got a day job. And he and his wife are trying to get pregnant. TV, movies, eating out—all of the sudden, everything else seems unworkable. His wife says she feels like a widow because he has no time for her. Well, he doesn’t.

Jacobs has arranged his book encyclopedia-like, A to Z. It is a super-condensed format featuring the best bits from the E.B., which expand naturally into a semi-chronological diary of Jacobs’ life. The E.B. greatest hits are more interesting by far than the tangents leading into the author’s world (not that those are dull or anything). They are a good mixture of light and substantial, snack and feast. Here are some of my favorites taken from Jacobs’ favorites, a best-of, best-of:


I’m indebted to Jacobs for slimming the Britannica down for all of us with civilian amounts of time on our hands. There are so many fascinating facts that at times you feel like gorging on them. And the above samples are only the tip of the iceberg. He’s an engaging writer, to be sure, but he’s not without fault. Time and again in the book he’s on about how he’s a regular guy, but then he lets it slip that he went to a fancy private prep school, that he graduated from Brown and that he has an agent. That’s more than just a small disconnect.

I was looking forward to the son telling the father that he did in fact finish the whole of the E.B., but Jacobs Jr. never gets around to it. Maybe the Britannica’s gigantic breadth gave him the ability to put his relationship with his father in perspective.