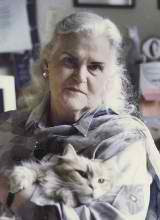 Groundbreaking fantasy author Anne McCaffrey has passed away of a stroke on Monday, November 21, 2011 at her home in Ireland. McCaffrey is best known for the Dragonriders of Pern universe. She authored or co-authored nearly 100 books, with a lot of firsts as a writer:

First with a science fiction title on the New York Times Bestseller List (1978, The White Dragon)

McCaffrey was recognized as one of the best ever for her impressive career:

Named Grand Master by the Science Fiction Writers of America (2005)

Read the rest of ICv2's article.
By Lorraine Walker