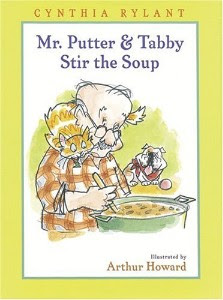 You may find it surprising that a series of books about two elderly neighbors and their pets would be so appealing to children, but Cynthia Rylant’s Mr. Putter & Tabby series is quite popular among young (and old *raises hand*) readers, popular enough to warrant twenty books—Mr. Putter & Tabby Ring the Bell was published in September. My first grader loves these chapter books so much he chooses one every week from his school library to bring home.

In the first book of the series, Mr. Putter & Tabby Pour the Tea, Mr. Putter decides that a cat would make the perfect companion. When he goes to the pet store to buy an older cat, there are none for sale because everyone knows that cute, frisky kittens make the best pets. So Mr. Putter heads to the shelter where he adopts an older, bent-whiskered cat in the twilight of her years, just like Mr. Putter himself. Neither one is cute or frisky, and that’s the way they like it! 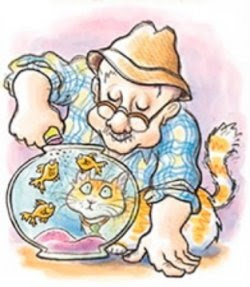 Tabby live next door to Mrs. Teaberry and her good but mischievous dog, Zeke. Mrs. Teaberry is also elderly, but she has a bit more bounce in her step than Mr. Putter; it’s mostly Mrs. Teaberry who’s responsible for their adventures, with Mr. Putter good-naturedly going along for the ride.

Although this elderly man and his cat’s endeavors are of the slower-paced variety—writing a book; painting the porch; stirring the soup—they are no less interesting and humorous for that. I love the way that aging and retirement are handled in these books, and how comfortable Mr. Putter and Mrs. Teaberry are in their own skin as they accept the limits on their more fragile bodies, but are still willing to attempt new challenges. Rylant creates such a positive view of getting older that she makes me want to hurry along my own eleven years, one month, and six hours before I leave the rat race and retire to my own adventures.
By Tressa Fancher