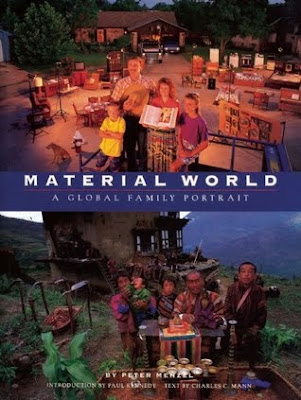 When this book came out eighteen years ago I latched onto it quickly. Almost twenty years later, I read through it again, mostly because there’s still nothing like it. About 250 pages, most of them color pictures, accompany brief texts that show you how a typical family lives in thirty countries. Each family has their own section, and each section has what the author calls a “big picture” where the family’s possessions are displayed in front of their home. Or at least the things I guess they’re not embarrassed to place out front of their home.

You see an extreme range of wealth here, from a Malian family, whose possessions could all fit neatly into an average American den, to, well, an American family, whose lot takes up their driveway, front yard and part of the street they live on. The Natomas’ (the Malian family) goods-blankets, cooking equipment, clothes-almost all fall into the survival category. It probably doesn’t differ greatly from what a Malian family would’ve had in the middle ages. The Texan Skeen family stuff is standard 20th century Western convenience and comfortable life array, but they don’t live luxuriously. Seeing the large, well-chosen color pictures conveys information no newspaper ever possibly could. Additional photos and text blocks further reveal the life of these families, their hopes, fears, aspirations, where they get their food, where they work, go to school, money troubles, religious life. Though the stats in the book have of course dated, there’s substantial material that hasn’t.

Also included are 2-page sections that show, at a glance, common articles throughout the world. Here you can compare and contrast even more directly than in the other portions of the book. Pics of families watching TV stacked four high and four columns across, from Kuwait, Brazil, Bosnia, Mongolia, Vietnam, Great Britain and so on. There are similar grid spreads on “Meals of the World” and Toilets (spic-and-span tile bathrooms to squat holes in stone floors).

Remarkably, thought there was the usual official meddling, only one country-Saddam’s Iraq-insisted on a model home for the project, rather than a real one. Things leap out at you and stay with you. Western Samoans, intensely Protestant, live in a purely communistic way as anyone perhaps ever does in the modern world, sharing everything somewhat like the way the early Christians did. An Albanian family struggles to get by after decades of brutal state communism courtesy of the dictator Enver Hoxha. A more radically different approach to communism from the easy-going Samoans is hard to imagine. An Iraqi mother does most everything close to the floor, ignoring her furniture. She follows the old Iraqi tradition here. Did the Iraqi officials, when they saw the book, feel embarrassed by her? An Argentine family recounts how they moved to Bolivia for new prospects years ago only to return home because they badly missed their relatives.

I especially like the photos of people cooking and eating. Meat, potatoes, bread and peppers are revealed as near-universal. Several shots had me salivating. But when I read about the sanitary conditions surrounding the shots I felt a confusion of emotions. Leaving in these and other contradictions is part of the book’s fascination and strength.

Material World is a fine book for wrecking stereotypes and maybe even for dissolving boundaries.

P.S. This book is cataloged Juvenile. Don’t let that stop you. For most intents and purposes, it’s an adult book. But kids will like the involving, ever-present photos.