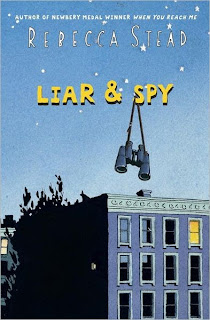 This is the story of George (the “s” is silent). Like many middle grade protagonists he is a seventh grader trying to navigate through the dark, murky waters of middle school. He’s struggling to deal with the bullies, P.E., the lunchroom, making friends, fitting in….. and on top of all the standard problems, he also has to deal with his father losing his job. Now his mom has to take on double shifts at the hospital and his family has to move from their beloved New York apartment to an unfamiliar place just a few blocks away. Poor Georges is friendless and out of sorts when he stumbles across a Spy Club sign in the basement of his new apartment building. He becomes an apprentice spy under the tutelage of Safer, a twelve year old, self-proclaimed professional spy. Together, the two try and unravel the mystery of a sinister, all-black wearing, mystery man dubbed Mr. X.

The story is packed full of humorous, mysterious, and surprising twists and turns as the two friends investigate the sinister stranger. It’s a great read for boys and the ending where Georges figures out the mystery was a genuine surprise. Kids and adults can appreciate Georges’s point of view throughout the story. I couldn’t help but sympathize with the guy as he tried to make sense out of everything. I was impressed at Georges’s clever solution to help his misfit classmates band together to deal with bullies.