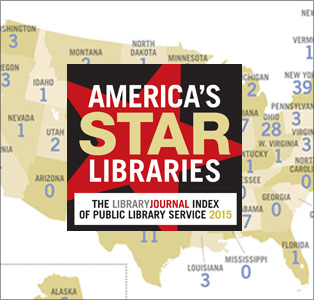 Birmingham Public Library (BPL) has been named a 2015 Star Library by Library Journal. Each year, the national publication compiles statistical information, based on population and spending, and rates libraries in a variety of categories.

Out of the 7,663 public libraries in the United States scored by the Library Journal (LJ) Index of Public Library Service, only 261 received the designation of being named a Star Library. For 2015, the Birmingham Public Library is one of just seven Alabama libraries to make the list. BPL received a three-Star rating. Homewood Public Library, a sister library in Jefferson County, walked away with a four-Star rating.

Birmingham Public Library Director Angela Fisher Hall said the Star Library designation from Library Journal is a tribute to the BPL staff, and the support it receives from the citizens of Birmingham.

“We are so honored that the Birmingham Public Library is being recognized for providing excellent services and programs for our patrons,” Hall said. “This Star status shows that our 19 BPL locations remain relevant and provide a valuable service for our citizens. As director, I want to publicly thank our employees for their dedication and hard work. Additionally, the entire BPL family owes a great deal of thanks to the Birmingham citizens who use our libraries daily and depend on us for their information and technology needs—because of them, we have received this honor.”

According to Library Journal, the eighth annual LJ Index compares U.S. public libraries with their spending peers based on four per capita output measures: circulation, library visits, program attendance, and public Internet computer use. Scores on the LJ Index are produced by measuring the relationships between each library’s statistics and the averages for its expenditure category.

Birmingham Public Library is among 54 new or returning Star Libraries—ones that were not Stars in last year’s ratings. Among libraries spending $10 million–$29.9 million, there are three new three-Star winners: Birmingham Public Library, Carnegie Library of Pittsburgh, and Stark County District Library, Canton, Ohio. The 2015 Star Libraries are found in 41 states scattered across the country geographically.

Library Journal said the competition for Star Library status is tougher than ever, with the number of libraries scored on the LJ Index at an all-time high. Factors that hurt libraries’ chances for achieving star status include lower tax base in states such as Mississippi and Oklahoma, and relatively lower levels of adult educational attainment that lead to higher literacy rates, especially in the South. So for a state like Alabama, with a lower tax base, to have seven Star Libraries is a great achievement.

Here is a closer look at the seven Star Libraries in the State of Alabama (listed by size):