Book Review: Dispatches From Pluto: Lost and Found in the Mississippi Delta 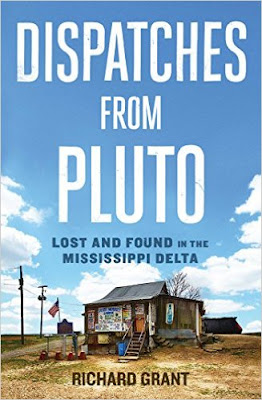 Dispatches From Pluto: Lost and Found in the Mississippi Delta
Richard Grant

Richard Grant is an author with that instinct for travel and adventure that characterizes the English. One of his previous books, God’s Middle Finger, is about travelling the Sierra Madre in Mexico with all its attendant dangers due to corrupt police, bandits, narcotraficantes, and dangerous flora and fauna. This time, he and his girlfriend move from the cultured environs of New York City to the languid backwoods of the Mississippi Delta. Moving into a dilapidated farmhouse in tiny Pluto, Mississippi, they soon meet a cast of eccentric characters, among them a 90-year-old blues singer, a homicidal doctor, catfish farmers, a retired CIA agent/diplomat, and owners of tiny and obscure cafes, blues houses, and barbecue joints. Pluto, population unknown but very small, is in Holmes County, smack in the middle of nowhere, 90 miles or more from Greenwood, Vicksburg, and Jackson, Mississippi.

Moving to the Delta has its ups and downs, including lots of snakes and armadillos, frightening neighbors, clouds of mosquitoes, and Southern Gothic characters still yearning for the “good ole days” of the pre-civil rights era. Grant learns to hunt and drink (sometimes simultaneously), plant a garden, sing the blues and gets an eyeful of backwater Mississippi at the dawn of the 21st century. Small-town politics and murder, declining schools, farms that are becoming ever more commercialized and corporate owned, and a people struggling to maintain a genteel way of life while at the same time creating a sustainable society are all portrayed.

The best of Grant’s writing is an innate liking for people no matter who they are, and a viewpoint splashed with humor and compassion. Grant and his fiancée have personal issues, but their relationship grows. Writing and literature, travel, making new friends, a zest for the good things in life including Delta cooking, and a strong sense of joie de vivre all make for entertaining reading. It makes me want to visit Pluto and the region to sample some of the culture and the environment.