Southern History Book of the Month: "The Thanksgiving Visitor" 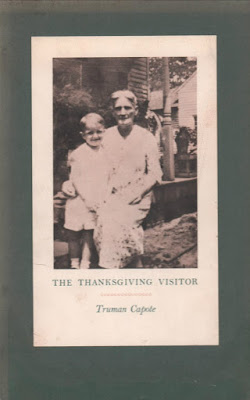 Truman Capote’s most famous short story is probably “A Christmas Memory,” but Buddy and his “friend” and cousin Miss Sook also appear in the story “The Thanksgiving Visitor,” in which Buddy has to contend with that childhood nightmare many of us know too well: the school bully.


Talk about mean! Odd Henderson was the meanest human creature in my experience.

And I’m speaking of a twelve-year-old boy, not some grownup who has had time to ripen a naturally evil disposition . . . he took after the rest of the Hendersons. The whole family . . . was a shiftless, surly bunch, every one of them ready to do you a bad turn; Odd wasn’t the worst of the lot, and brother, that is saying something.

My first contact with this story was when I was in elementary school and heard it read aloud. My sympathies were entirely with Buddy, and so I missed the way in which Capote expertly weaves into the text all the circumstances that keep Odd Henderson from being one-hundred-percent loathsome, such as his poverty, his father “who was a bootlegger and usually in jail,” his mother who is trying to keep the family provided for, and the way Odd can quiet his fussy younger brothers and sisters by singing to them. Yes, I missed all of this, and felt a cold shock when Miss Sook thinks the solution to the bullying is to invite Odd to Thanksgiving dinner. I seem to remember thinking at the time, “Is she crazy?” I heartily seconded Buddy’s resentment that one of his precious days away from school—and away from his tormentor—is going to be ruined by his friend’s well-intentioned meddling.

Part of me still feels that way. We’ve all heard the clichés about how many bullies are not entirely responsible for their behavior: that they’re in some way underprivileged, or haven’t been taught to behave properly, or they’re envious of their victim—the eye-rolling list goes on and on. But part of the genius of Capote is that this story is riveting in spite of the circumstances that seem to be clichés. There is the moment when Buddy sees a way to get the upper hand and humiliate Odd in front of the assembled Thanksgiving guests, but it doesn’t turn out the way he had expected, and Capote doesn’t make the mistake of granting Buddy some epiphany that would be unlikely in a child:


". . . Buddy, there is only one unpardonable sin: deliberate cruelty. All else can be forgiven. That, never. Do you understand me, Buddy?”

I did, dimly, and time has taught me that she was right. But at that moment I mainly comprehended that because my revenge had failed, my method must be wrong.

It’s been many years since I first heard “The Thanksgiving Visitor” and it still pleases me. Words like "sweet" and "heartwarming" may come to mind, but without the juvenile connotations; after all, some wines are sweet and heartwarming as well. Try this story as a mellow accompaniment for your turkey and dressing, and have a Happy Thanksgiving.

“10 Things You Might Not Have Known About Truman Capote”
http://mentalfloss.com/article/59198/10-things-you-might-not-have-known-about-truman-capote