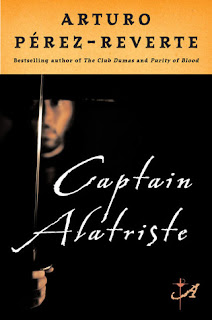 If you enjoy adventure in exotic times and places, and writing that makes you smile with appreciation, Spanish author Arturo Perez-Reverte has written a series of books about a Castilian soldier in the heart of Spain’s worldwide empire in the Golden Age. Captain Aristide “was not the most honest and pious of men, but he was courageous.” Indeed, on one of the first pages of the book Perez-Reverte tells us what the story is to be about in one of his rolling sentences that can carry the reader far as well as the drive of the narrative:


… the story I am going to tell you must have taken place around sixteen hundred and twenty something. It is the adventure of two masked men and two Englishmen, which caused not a little talk at court, and in which the captain not only came close to losing the patched up hide he had managed to save in Flanders, and in battling Turkish and Barbary corsairs, but also made himself a pair of enemies who would harass him for the rest of his life.

The swordplay is sharply written, but it occupies a surprisingly small fraction of the story. We are treated to detailed description of life and places that still exist today in built form, but as they appeared and were lived in when Madrid was the capital of one of the largest, and richest, empires the world has ever known. The novel is often drenched in stoic remorse, as befits an older narrator reminiscing about the wonder and optimism of youth: “She (Spain) may still have been powerful, and feared by other nations, but she was touched by death in her soul.”

For anyone unfamiliar with how the history of Spain’s policies and actions directed the course of western history, Captain Alatriste will provide a compelling pathway back to old Madrid.

Enjoy your international armchair travels for free at the Birmingham Public Library.