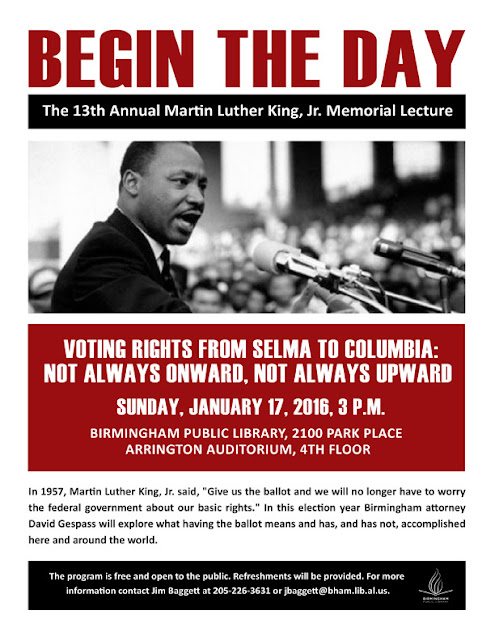 Food Drive
In conjunction with the King lecture, the Birmingham Peace Project and the Birmingham Islamic Society will host a food drive benefiting Greater Birmingham Ministries. Bring non-perishable food items such as pasta, lentils, spices, beans, cooking supplies, and canned goods to the Central Library Atrium between 2:00 to 5:00 p.m. on January 17.

This year’s speaker, human rights attorney David Gespass, is author of the National Lawyers Guild brief to the Supreme Court defending the Voting Rights Act in Shelby County vs. Holder. He began his law practice in Washington, DC in 1971 and spent a year working in Japan with the National Lawyers Guild Military Law Office. He is the immediate past president of the National Lawyers Guild, the oldest integrated national bar organization in the United States. He has also served as editor-in-chief of the Guild Practitioner (now NLG Review), the Guild's intellectual journal. He was a founder and steering committee member of the Military Law Task Force and has been a member of the advisory board of the National Police Accountability Project since its founding in 1999. His practice includes police misconduct and prisoner rights' litigation, Social Security disability and personal injury. David is a founding member and past chair of the Birmingham Peace Project and has practiced law in Birmingham since 1978, as a partner in Gespass and Johnson.