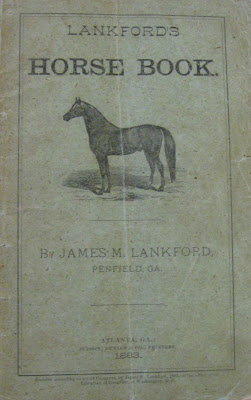 When thinking of the lives lost in the Civil War, few of us remember the cost in animal lives as well as human. According to one article titled “The Horse in the Civil War,” the death toll for horses was staggering:


The total number of horses and mules killed in the Civil War mounts up to more than one million. In the beginning of the war, more horses were being killed than men. The number killed at the Battle of Gettysburg totaled around 1,500. The Union lost 881 horses and mules, and the Confederacy lost 619.

It is the great misfortune of horses that they can be saddle-broken and tamed. If the horse was more like an ox, not suited for riding, the war would have been drastically different.

This may account for a guide to horse care like Lankford’s Horse Book. Published in 1883, James Lankford’s guide to the care of sick and injured horses comes from a time when the horse played a major role in transportation and labor. Furthermore, the Horse Book was published in Atlanta, Georgia; in 1883 the memory of Sherman and the March to the Sea would still be fresh and after the carnage of the Civil War horses may have been scarce in that part of the country, so knowing how to care for your horse would have been critically important. Readers of Gone with the Wind will remember how Scarlett shot the Yankee deserter and how pleased she was to have acquired his horse along with the money in his wallet.

Some of the remedies and procedures in the Horse Book would probably horrify modern veterinarians. Along with milder treatments involving substances like soapsuds, salt, vinegar, and mustard, Lankford’s cures also include ingredients such as kerosene oil, tobacco juice, arsenic, sulphur, and turpentine. You would think any horse that wasn’t near death would get up and run away if he saw someone approaching with such a “cure” in mind. Here is a sample remedy:


Cure for Colic
Boil one quart of strong tobacco juice to a deep yellow color. When milkwarm, put into it, if convenient, one gill of whiskey or spirits of any kind. If you can’t get the spirits, grind four or five tablespoonfuls of mustard, put into the bottle of tobacco juice, and drench the horse or mule, which will cease the rolling, as the mixture will make it very sick; but you will find that it relaxes the whole system, and the horse or mule is well as soon as it gets over the effects of the tobacco juice, which may be one hour . . . I learned this remedy during our last war, and have never used any other. I have not seen a horse or mule die with colic since I learned the remedy.

Along with colic, Lankford addresses other conditions that sound pretty alarming, such as Horse Strangles, Blind Staggers, Lampers, and Gleet. At least they sound scary to me, since I’m no horsewoman. But there is also advice on how to buy a good horse, telling a horse’s age by his teeth, how to care for a mare in foal, and how to break a colt.

Lankford’s Horse Book is a fascinating glimpse of an era when horses played a larger role in our everyday lives and a reminder to be grateful for advances in medicine, whether for horses or for humans! If you’d like to examine this item for yourself, it’s part of the rare book collection in the Southern History Department.

For More on Horses:

“History of the Horse”
http://www.thinklikeahorse.org/index-1.html