Book Review: Catch Me If You Can 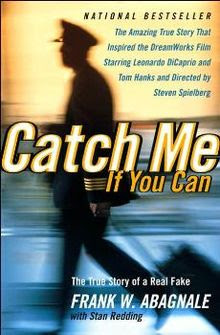 Catch Me If You Can: The True Story of a Real Fake
Frank Abagnale with Stan Redding

I first encountered Frank Abagnale as a chapter in a book about impostors. His story grabbed me, but it wasn’t enough. I naturally proceeded to Abagnale’s book about his young life in crime. It too was enthralling. But, as the author of the impostors book said, Abagnale made his life from lying. How much of the book can we believe?

Let’s assume the book is basically true. On the cover is the legend, “The true story.” But it’s basically, not entirely, true. Abagnale has gone on record stating that co-author Stan Redding has exaggerated parts of the book at the behest of the publisher and that he, Abagnale, has accepted this as the price of publishing. We do know that Abagnale is an ex-con who was jailed in several countries for fraud-related offenses. And we know that, in the sixties and early seventies, when the criminal events in the book take place, an FBI agent was put in charge solely to track and arrest Abagnale. Presumably the various leading security companies that hired Abagnale as a consultant after he served his prison time made their decision to hire him based on his expert knowledge of fraud, which of course implies that he did in fact commit fraud on or somewhere near the extremely high level he claims to have done so in the book. And Abagnale maintains throughout the book he was a shameless crook and he has no reason to crow about all the misdeeds he committed. So all of the things tilt the balance toward “true,” if not true. Are you confused now? You have a right to be.

If Catch Me is even largely true, it reveals that Abagnale was an actor on an uncommon level, to say the least. He risked not bad reviews but going to jail. He worked without a net. He broke down the fourth wall. He reminds me of the comment Andre Gregory’s theatre guru Jerzy Grotowski made in My Dinner With Andre about how everyone’s acting so well in real life now that the theatre seems irrelevant. Abagnale, and all good impostors, push acting into new and groundbreaking territory. What they do is reminiscent of Grotowski’s paratheatrical work, but even Grotowski probably never held up criminals as exemplars. Ethical behavior, of course, is another story.

Abagnale’s writing style is odd. It seems to be made up of many different styles, stitched together to create an unseamless whole, mirroring the different selves Abagnale assumed while engaged in his life of fraud. This oddness doesn’t really slow the story down but it does make it a bit clunkier than it needed to be.

Let’s assume it’s mostly made up. There are a few events in the book that obviously don’t gel. For example, Abagnale claims that when Swedish authorities arrested him after his French prison stint, they didn’t put him in restraints but did warn him that if he tried to escape they’d shoot him. This seems blatantly contradictory, to say the least, not to mention impractical. Abagnale claims he impersonated four persons—an airline pilot, a college teaching assistant, a physician, and an attorney, giving the names he went under while in those roles. But a San Francisco Chronicle reporter published a piece showing that he could find no evidence of the existence of persons with these aliases in these jobs at the times Abagnale related. Abagnale countered that he didn’t want to embarrass and humiliate the people he hoodwinked and so he chose to use aliases. Does the book work as fiction? Yes it does. This memoir (or “memoir”) has what a certain kind of novel needs: a good story with a compelling narrative, plausible and vivid details, believable character motivations, vivid image-making, and a dramatic conclusion.

All that said, I wanted the book to be at least mostly true. Not because I wanted all the marks to be ripped off or because I wanted Abagnale to be punished so much as this: if it were mostly true, it would be better because someone who did all that for real is more interesting than someone who made it up. Because the book would be what it mostly claims to be. I wanted to be baited, but I was ambivalent about being switched. Baiting and switching is as old as the hills and as American as apple pie, but it’s not something I enjoyed going through. Did Abagnale fool some people, pay his debt to society, and then fool me through his book? Has he really repented? I’ll never fully know.

Note: Catch Me If You Can isn’t quite the same thing as the enjoyable Spielberg movie based on it and carrying the same title.