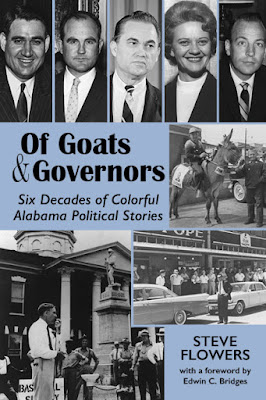 Join us at the Central Library on Tuesday, January 12, 2016, at 6:00 p.m., for an author talk and book signing by popular political columnist and commentator Steve Flowers.

Few states have as fascinating a political history as Alabama, especially in the post-World War II era. Moving onto and off the state’s electoral stage during this time period of remarkable transformation have been some of the most interesting figures in 20th century American government and politics. Now, the backstage intrigue of Alabama politics receives a lively treatment in Of Goats and Governors: Sex Decades of Colorful Alabama Political Stories, the high-spirited new memoir by former Alabama Representative Steve Flowers.

In addition to his newspaper column, Steve Flowers serves as the political analyst for the University of Alabama radio and television network and the political analyst for WAKA/Alabama News Network in Montgomery. Steve served in the Alabama House of Representatives from 1982-1998 and has been an up close observer and participant in Alabama politics for more than 50 years.

Copies of the book will be available for purchase and refreshments will be provided.