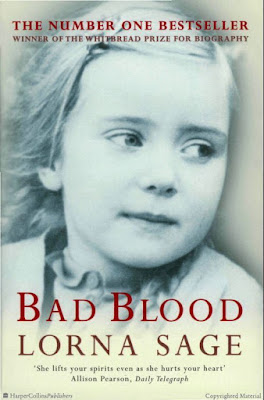 Growing up in a “rural slum” in Hanmer, Wales, in the '40s and '50s wouldn’t have been easy for anyone, and Lorna Sage couldn’t begin to fit in. She was socially inept, her family was more than usually dysfunctional, and her grandfather, a priest, had shamed the family with an extramarital affair in the Thirties, and the shame lived on into Lorna’s generation.

Lorna’s family didn’t speak Welsh. They had poor-to-nonexistent social skills. They lived in a dirty environment, but didn’t care too much as there was their dirt and other people’s dirt, the only kind that counted. Her home relied on gas lamps and candles, common in Hanmer at the time. Lorna’s madrassah-like school stressed two things above all, “obedience and knowing things by heart.” The village was characterized by “hierarchy and immobility,” something that Alabamians can recognize.

Lorna’s grandpa, an Anglican priest in the Church of Wales, had his affair with a young woman, shaming the whole village, the Sages in particular. Grandma, who seldom talked to her husband anyway, shut down almost all communication with him after she discovered his cheating. Sage uses her grandfather’s diaries to help her construct a narrative of the scandal. A sample diary entry helps illustrate the nonevent that was most of grandpa’s non-scandal career: “Got up for H[oly] C[ommunion]. No one at HC.” Like Father McKenzie in the Beatles’ “Eleanor Rigby,” he was often “writing a sermon for no one to hear.” What did he care? Not a lot, apparently. He had the “bad blood” of the title. When he died, his jaw was fixed shut with a handkerchief in the manner of Marley in A Christmas Carol. After he died, grandma saw his ghost on the stairs. She told Lorna it was the sort of “cheap theatrical trick” she expected of him. This is funny. Much of the book is.

Lorna Sage’s parents were odd ducks too. They caused a small scandal of their own because they dated as teenagers and were observed talking in a parked car. No matter that they were chaste. Such things just weren’t done in Hanmer.

Honestly, just being female was a strike against you in Hanmer, North Wales, a Victorian place (with medieval traces) that had long outlived the Victorian age. So getting pregnant before marriage was not a good career move for Lorna. She thus inherited the bad blood of grandpa that skipped her parents’ generation. Though she got married to her boyfriend when they discovered she was pregnant, the damage was done and the family was made to feel guilty all over again. Sage’s account of the isolated Maternity Ward she was sent to vividly shows the shame foisted on all mothers during this time. Handwashing was forbidden. Bathing was rationed. Makeup was “frowned upon.” Babies were kept in a section of this remote building where mothers weren’t allowed. An unmarried mother was permanently sequestered from everyone else as if she were radioactive. The greatest of these is, apparently, shame.

How did Sage cope with all this bloody narrow-mindedness? By reading, mostly. She maintained a strong intellectual life that sustained her and reminded her that there was a bigger world out there. She didn’t triumph over adversity, she just kept plugging away, getting brainier (if not always more practical or sensible). She gradually came to stand against a culture that marginalized her first for being a woman, and second for trying to educate herself. She finally got into a college (most turned her down because she was a woman, or because she was married, or both). If anyone needs reminding of how tough it could be for women before the modern women’s movement got going, this book is a sobering reminder. The memoir was written by a much older Sage who often bears out her name. It’s impeccably literary but always accessible and rightly unsentimental. Sage doesn’t settle scores. Instead she presents her story with understatement and sly wit, trusting that the oddness of the events and the injustices she endured will come through better that way, and they do.