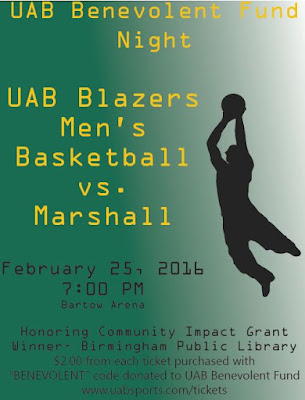 The BPL Teens Engineer Birmingham, a program of the Birmingham Public Library (BPL), will receive a $50,000 grant from the UAB Benevolent Fund grant program during the UAB Blazers men's basketball game Thursday, February 25. The check will be presented on the court to BPL staff during a commercial break. The game tips off at 7:00 p.m. at Bartow Arena on the UAB campus.

Lance Simpson, system teen librarian for the Birmingham Public Library, said the grant will help expand the BPL’s teen engineering afterschool program, enabling it to serve more young people in Birmingham. Simpson and Carrie Campbell, grants and special projects librarian, submitted the grant application on behalf of BPL. He said the BPL Teens Engineer Birmingham program is grateful for the UAB Benevolent Fund and UAB employees for supporting their efforts to serve the teens of Birmingham.

“Our teens are very excited, and so are the UAB students with whom we've been working,” Simpson said. “This program will encourage students to push themselves academically, and set them up for great success in future STEM careers.”

Simpson submitted a video to UAB on December 4 as voting by UAB employees started, sharing the vision and mission of the BPL Teens Engineer Birmingham program. See link to the video here and background on the UAB Benevolent Fund program: https://youtu.be/CUQ6eDwmpgI

The $50,000 from the fund will be used to provide afterschool robotics programs to students at the BPL’s Central, Southside, and Woodlawn libraries during the 2016-17 school year.

“We appreciate the work BPL does in our community and we look forward to a strong continued working relationship with BPL," Higginbotham said in an e-mail to Simpson.

About 1,500 UAB employees cast their vote for the recipient agency after viewing video presentations from three finalists. The first UAB Community Impact Grant was awarded to Magic City Harvest in December 2014.

“The Community Impact Grant is a unique and engaging opportunity for UAB employees to make their voices heard and make a deep, lasting impact in our community,” Higginbotham said. “For local nonprofits, the significant funding with this grant will allow them to dream big in regard to new programming and efforts to address the challenging community issues of childhood educational success, healthy and active lifestyles, and family economic security.”
By Tressa Fancher