Your Vote, Your Voice 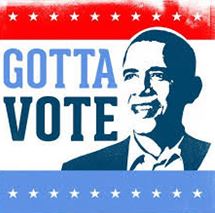 As Black History Month comes to a close, and during this 2016 election year, I’d like to focus on our president, President Barack Obama, and the importance of registering to vote.

Barack Obama was born in Hawaii to a white mother and a black father. Mr. Obama overcame insurmountable odds to become the nation’s first African American president. As commander in chief, Obama has created jobs for thousands, defeated Osama Bin Laden, and implemented a health care plan that provides health care for even the poorest of individuals. President Obama is a shining example of how someone from simple obscurity can rise to hold the highest office in the land. President Obama is our 44th president, and, in my opinion, will go down in history as one of the greatest presidents that has ever served. If you would like to know more about the life of our president, BPL has several adult biographies, juvenile biographies, and DVDs for more in-depth study.

So in the spirit of patriotism and during this election year, please register to vote if you have not done so already. So many individuals have sacrificed so much so that we could have the right to vote. Don’t let this wonderful privilege pass you by. The 2016 Election Day schedule is as follows:

Voter registration forms may be picked up at any BPL location, so do your civic duty, get registered, and go out and vote. See you at the polls.