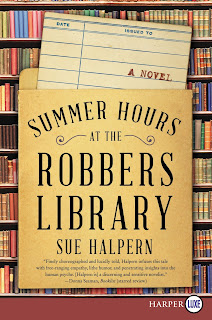 Kit (formerly Katherine) has changed her name and moved far away after being caught up in a wrongful death case involving her former husband. She works as the head librarian in the fading industrial town of Seldom Falls, PA. As the narrative unfolds, it changes from the viewpoint of Kit to those of a newly unemployed Wall Street whiz kid named Rusty to a 15-year-old girl, a member of a “Rainbow Family,” named Sunny. Sunny is sentenced to community service for stealing a dictionary from the mall bookstore and will serve it through the summer in the Riverton Public Library.

Sunny (full name: Solstice Arkinsky) lives with her parents, Willow and Steve, and relates various stages of their nomadic life traveling cross country to sell handmade crafts at various fairs and malls. Sunny is 15 and opinionated and questioning—not what Kit really needs. Several years into her self-imposed exile, Kit has no close friends, lives in a run-down old house that she is spending a lot of money on to update, and keeps a series of notebooks that she unobtrusively journals something in ever day at the library. Rusty is seeking escape from financial ruin by trying to track down a bank account that his mother deposited over 50 years earlier. All he knows is that it was in “a” Riverton National Bank. The bank is gone be he hopes to recover it from the state. He spends days researching the area, visiting the library every day, and getting to know the staff and four old friends who meet there every morning.

Sunny begins to become attached to Kit, who also begins to see Sunny as a reflection of herself. Rusty is staying in a motel and begins talking to the Four, who begin to school him on life and and a few other mysteries.

As the novel progresses, each of the three main character are revealed to be seeking a new life, a purpose, and perhaps a new family in their own way. The mystery of Kit/Katherine is slowly unveiled and Sunnys parent’s nomadic ways are explained. In the end, all is not well, but there is a renewed hope for most of the characters.
By Tressa Fancher