- September 20, 2018
Banned Books Week, an annual national event celebrating the freedom to read, kicks off this Sunday, September 23, and concludes on Saturday, September 29, 2018.

One of the top ten challenged books of 2017, The Hate U Give by Angie Thomas, was the August book of the month by North Avondale Chapter Chatters Book Club. Inspired by the Black Lives Matter Movement, Thomas' debut novel addresses the issues of racism and police violence with heart and honesty when 16-year-old Starr Carter witnesses the fatal shooting of her childhood friend by a police officer. 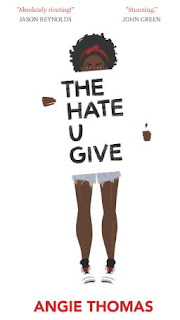 North Avondale Library branch manager Saundra Ross said the club had a fascinating discussion about the book, which deals with the controversial subject of race and police shootings of blacks in America. The next meeting is September 26 at 10:30 a.m.

A movie version of The Hate U Give will be released on a limited basis October 4 and nationwide on October 19, 2018. View the movie trailer.


Read an interview with the author, Angie Thomas, by the National Book Foundation, presenter of the annual national book of the year.

The 2018 Banned Books Week theme, “Banning Books Silences Stories,” is a reminder that everyone needs to speak out against the tide of censorship. Banned Books Week was launched in 1982 in response to a sudden surge in the number of challenges to popular books in schools, bookstores, and libraries. Banned Books Week brings together the entire book community—librarians, booksellers, publishers, journalists, and readers.

See the American Library Association Office for Intellectual Freedom list of the Top 10 Most Challenged Books of 2017 that includes The Hate U Give.
By Birmingham Public Library