- September 20, 2018
David Harris became fascinated by the game of chess as an 18-year-old Army private stationed in Hawaii while watching fellow soldiers play. Four decades later, he is now a nationally certified chess instructor who volunteers his time every Monday to teach young patrons at the East Lake Branch Library how to play chess.

“Chess is a fascinating game that teaches young people skills that help them in life—patience, how to make wise decisions, and how to overcome mistakes,” Harris said during a break from teaching a couple of sixth-grade Birmingham students after school at the East Lake Library. 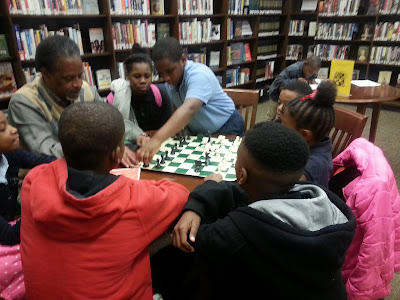 Every Monday at 3:00 p.m., Harris leads the Say Yes to Chess club, free lessons for Birmingham students visiting the library after school. He even teaches chess to adults who desire to learn the game. Several years ago, Harris formed a chess club at nearby Woodlawn High School that in its heyday had 40 members.

William Darby, branch manager at East Lake Library, said Harris' chess lessons have been well received. He said if you hear one of the children calling another a "chess head,” it is a compliment.

“Although chess is often considered a game for intellectuals, children attending an after school chess program at East Lake Library are learning chess can be fun,” Darby said. “Due to the volunteerism of Mr. Harris, young patrons are improving their thinking skills, concentration, and learning to consider the consequences of a decision before making a move. They learn to congratulate others when a challenge ends in a loss for them.” 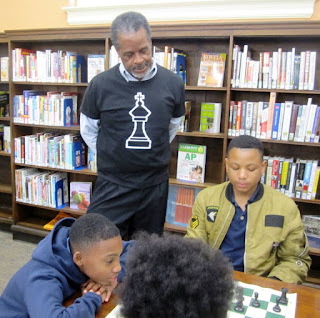 Harris said when kids first start to play, they are intimidated and think it’s too hard a game to learn. After he teaches them the steps to making the right move, their confidence improves.

“Not every one of our kids can be an athlete,” Harris said. “I tell the kids if they get good in chess, they can win scholarships to college. There are professional chess players who make good money. It’s a fun game. It has been a joy to see the kids learn to appreciate the game.”

BPL has resources including books and videos on how to learn to play chess.
By Birmingham Public Library