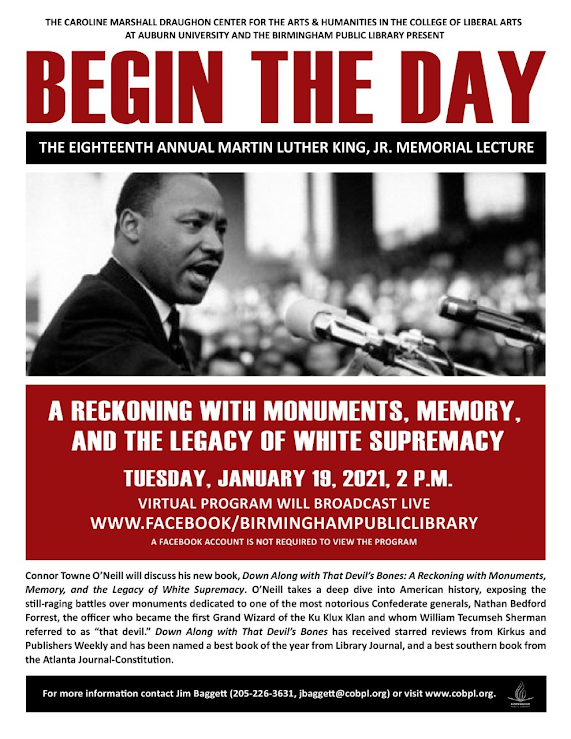 What: The Eighteenth Annual Martin Luther King, Jr. Memorial Lecture "A Reckoning with Monuments, Memory and the Legacy of White Supremacy"
When: Tuesday, January 19, 2021, 2:00 p.m.
Where: BPL Facebook Page, www.facebook.com/BirminghamPublicLibrary
Details: Author Connor O'Neill will discuss the legacy of white supremacy in this virtual event, the Birmingham Public Library's 18th Annual Martin Luther King, Jr. Memorial Lecture. No registration required.
Birmingham, Ala. – For nearly two decades each January, the Birmingham Public Library’s Department of Archives and Manuscripts has sponsored Begin the Day: The Annual Martin Luther King, Jr. Memorial Lecture as part of the celebration of Martin Luther King, Jr. Day.
The 2021 Martin Luther King Lecture, to air virtually on the BPL Facebook page at 2:00 p.m. on Tuesday, January 19, will feature author Connor Towne O’Neill discussing his new book, Down Along with That Devil’s Bones: A Reckoning with Monuments, Memory, and the Legacy of White Supremacy.
The topic is timely in the wake of the insurrection in which pro-Trump protesters stormed the U.S. Capitol Building last Wednesday, January 6, as Congress was certifying the Electoral College votes for President-Elect Joe Biden’s victory over President Trump. Media reports have indicated that members of white supremacist groups including The Proud Boys were among the group that forced their way into the U.S. Capitol.
In his book, O’Neill takes a deep dive into American history, exposing the still-raging battles over monuments dedicated to one of the most notorious Confederate generals, Nathan Bedford Forrest, the officer who became the first Grand Wizard of the Ku Klux Klan and whom William Tecumseh Sherman referred to as “that devil.”
Down Along with That Devil’s Bones has received starred reviews from Kirkus and Publishers Weekly and has been named a best book of the year from Library Journal, and a best southern book from the Atlanta Journal-Constitution.
Now in its 18th year, the MLK Lecture has featured civil rights activists, scholars, children’s book authors, and community leaders discussing civil rights history and contemporary human rights issues including immigrant rights, voting rights, human trafficking, and Islamophobia.
Connor Towne O’Neill’s writings have appeared in New York magazine, Vulture, Slate, RBMA, and the Village Voice, and he works as a producer on the NPR podcast White Lies, which was a finalist for the 2020 Pulitzer Prize in Audio Reporting. Originally from Lancaster, Pennsylvania, he lives in Tuscaloosa, Alabama, and teaches at Auburn University and with the Alabama Prison Arts + Education Project.
The program will be broadcast live at 10 a.m. January 19 on the Birmingham Public Library Facebook page at www.facebook.com/BirminghamPublicLibrary. A Facebook account is not required to view the program.
The live program is co-sponsored by the Caroline Marshall Draughon Center for the Arts & Humanities in the College of Liberal Arts at Auburn University and the Birmingham Public Library’s Department of Archives and Manuscripts.
For more information contact Jim Baggett (205) 226-3631, jbaggett@bham.lib.al.us) or visit www.cobpl.org.
By Roy L. Williams