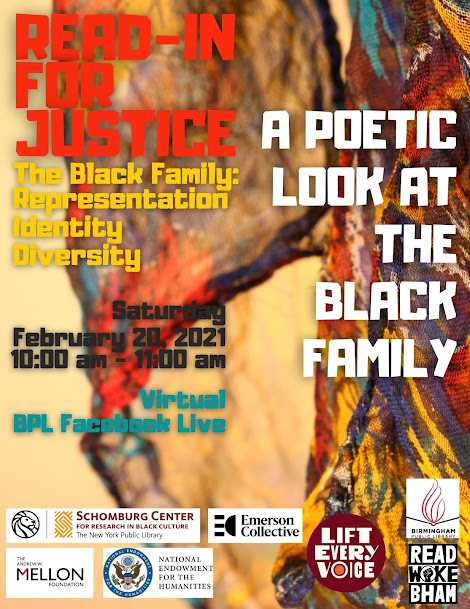 By Gelenda Norman| Central Library Youth Department
The Birmingham Public Library’s Read-In for Justice will return in February by celebrating the theme of 2021 Black History Month: “The Black Family: Representation, Identity, and Diversity.”
Join us virtually, via BPL Facebook Live, at 10:00 a.m. on Saturday, February 20, 2021.
This virtual program, entitled “Read-In for Justice: A Poetic Look at the Black Family,” will embark upon a poetic journey that will highlight and celebrate the beauty and richness of the African-American family and its heritage. Readers representing multiple generations will lend their voices to works written by African American poets, past and present, as well as themselves.
The program is funded by a grant BPL received in the fall 2020 from “Lift Every Voice: The Nationwide Celebration of 250 Years of African American Poetry”.
This award allowed BPL to host two virtual programs, Read-In for Justice (10:00 a.m. Saturday, February 20) and Bards & Brews (6:00 p.m. Friday, February 5).
Lift Every Voice is a national public humanities initiative that engages participants in a multifaceted exploration of African American poetry, the perspectives it offers on American history and the struggle for racial justice, and the universality of its imaginative response to the personal experiences of Black Americans over three centuries. Click here for details (https://www.africanamericanpoetry.org)
About Read-In for Justice
BPL created Read-In for Justice in June 2020 in response to the racial injustice firestorm caused by the death of George Floyd. Held four times between June 27 and September 12, 2020, Read-In for Justice allows Birmingham area storytellers to voice their frustration by reading books written by people of color. This monthly event has been viewed thousands of times on Facebook, attracting individuals of all races eager to speak out against racism.
The Birmingham Public Library's Read-In for Justice program was nominated for the Urban Libraries Council's 2020 Innovations Awards in the Race and Social Equity Category.
The Urban Libraries Council ran a blog about Read-In for Justice written by Gelenda Norman in August 2020.
Hosted via Facebook Live by BPL Outreach Librarian Candice Hardy, Read-In for Justice has expanded beyond authors reading books on race and social justice. The August program, Let the Children Speak, featured three poetry camp teens sharing original poems inspired by the Birmingham civil rights documentary, “Mighty Times: The Children’s March.” In September, BPL hosted Read In for Justice: Hispanic Heritage Month, featuring books written by Latino authors, including some read in Spanish.
To get an idea of what to expect at Read-In for Justice, click on the links below to four programs  that aired last year on the BPL Facebook page:
Read in for Justice June 27, 2020
https://www.facebook.com/BirminghamPublicLibrary/videos/582911772598387
Read in for Justice: July 11, 2020
https://www.facebook.com/BirminghamPublicLibrary/videos/1388603744684229
Read in for Justice: Let the Children Speak August 8, 2020
https://www.facebook.com/BirminghamPublicLibrary/videos/733853867188299
Read in for Justice: Hispanic Heritage Month, September 12, 2020
https://www.facebook.com/BirminghamPublicLibrary/videos/680948059185616
By Roy L. Williams