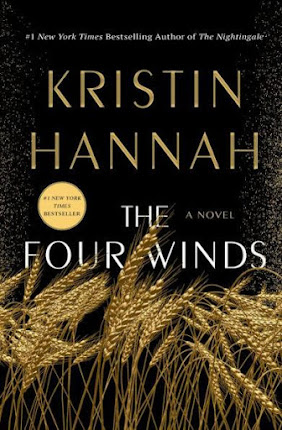 By Jill Lollar | Central Library Circulation/Information Desk
The iconic women captured in Dorothea Lange’s depression era photographs tell their stories in Kristen Hannah’s new novel, The Four Winds.
Inspired by Lange’s Woman of the High Plains, this poignant fictional narrative will draw you in and break your heart. The central character, Elsa Wolcott, embodies the courage and strength shown by millions of unsung American women who withstood the dangers and hardships of the great depression.
From her dustbowl farm in Texas to California’s poverty stricken migrant camps we follow Elsa as she fights for her family’s survival. Elsa’s story is filled with the unrelenting loss that plagues most novels of the great depression.
The onslaught of tragedy after tragedy may grow tedious and exhausting for some readers. However, if you enjoy a good tearjerker, get your hankies out and pick up The Four Winds. You will not be disappointed.
You can find this book in the Central Library  Fiction Department.
Click here to see a listing of Jefferson County Library Cooperative (JCLC) member libraries including BPL that have copies of The Four Winds available for checkout.
The Four Winds was named an Amazon Best Book of February 2021.
By Roy L. Williams