BPL@Night Rocks with George and the G-men @ Avondale Library 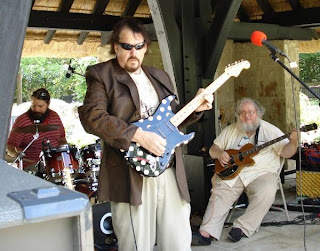 Originally created as a blues band, the G-Men have brought their eclectic mix of blues, rock, soul, and funk to venues throughout the Southeast, including this year's Stokin' the Fire BBQ Festival at Sloss Furnace and the 2008 Jazz on the Grass Concert and Labor Day Festival at the Alabama Shakespeare Festival Gardens.

George and the G-Men was formed in 1997 by Birmingham area singer/songwriter George Griffin. The G-Men are known for their high-energy shows containing a mix of original material and creatively modified cover songs. The band has released two CDs, Caught Between The Sun And The Moon in 1998 and 22nd Street Live in 2003.

Check out the George and the G-Men myspace page for show dates, music, pictures and performance videos!

Performance Details
Who: George and the G-men
Where: Avondale Library
When: Tuesday, October 21
Time: 6:30 p.m.

BPL@Night performances are free and open to the public, and light refreshments will be served.
BPL thanks Compass Bank for its generous support of BPL@Night. BPL@Night is also made possible by grants from the Alabama State Council on the Arts and the National Endowment for the Arts.
By Ellen Griffin Shade