Food for Fines Was a Success! 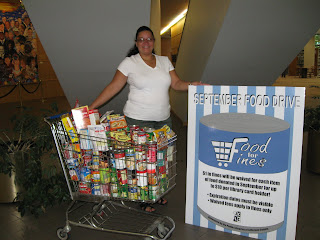 The 39 Public Libraries of Jefferson County collected approximately 11 tons of food during the month of September.

The September Library Food for Fines drive was held the month of September in conjunction with the annual National Library Card Sign-up Month. Fines were waived for each item of food donated up to $10.00 per patron. Canned goods and other non-perishable food items were collected and donated to local food banks such as United Way, Magic City Harvest, and Greater Birmingham Ministries. Many libraries donated to a local church or food bank in their neighborhood.

Spokesperson Pat Ryan, executive director of Jefferson County Library Cooperative said, “We had not held an amnesty campaign since 1997. Therefore, we felt this was a good time to give back to the community and the Food for Fines program helped us do that.” The public libraries hope to make this an annual September event.
By Tressa Fancher