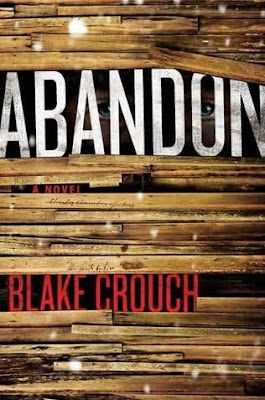 I’ve never been a fan of thrillers. The tried-and-true thriller formula goes something like this: person disappears; detective is called; detective interviews people whose names you can’t keep straight; red herrings are tossed about; person is found, sometimes dead, sometimes alive. The end. If you want to read an outside-the-box thriller, then get in line for Blake Crouch’s Abandon.

Abandon is a parallel story that seamlessly moves from 1893 to the present day. It begins on December 28, 1893, when a mule skinner rides into the once bustling mining town of Abandon, Colorado. But now it’s all but deserted, 123 townsfolk vanished, leaving balls of crumpled wrapping paper under Christmas trees and frozen holiday dinners on kitchen tables. The only resident left behind is little curly-haired, coal-eyed Harriet. She greets the skinner with an army revolver hanging at her side. She knows the gun is used for killin’, and she promises him he’ll feel better directly.

It is 2009 and freelance journalist Abigail Foster has joined her estranged father, Lawrence, a history professor; a husband and wife team of paranormal photographers; and a guide and his assistant in Colorado to hike to the ghost town of Abandon, where they'll search for clues about this Croatoan-like disappearance. Not long after nightfall on the first day of exploration, the group discovers that the dilapidated town isn’t abandoned, and soon learn what Willliam Faulkner warned us about: The past isn’t dead and buried. In fact, it isn’t even past.

Abandon’s 1893 characters are so fully realized that you’ll want them to hang around longer than their dedicated chapters. There is Ezekiel and Gloria Curtice, a husband and wife with checkered pasts trying to cope with the loss of their son, Gus; mute piano player, Lana; the pale and balding Molly Madsen, who sits in the window of her second floor room, waiting for her beloved husband's return; Bessie McCabe, battered wife of stuttering Billy and mother of 6-year-old Harriet; Stephen Cole, the town preacher who has started hearing God's voice, and making plans for the town's salvation; and hardened barkeep Joss Maddox, who is soon to be hanged for murder.

Crouch's third book is about a town named Abandon, but its theme is about abandonment, too: abandoned pasts, abandoned lovers, abandoned family, and lost children, and who might be waiting for them on the other side.

Tressa Fancher said…
Holley, you will love it. There are only a few books a year that I pester people about reading, this is one of them.

Some people think it's a horror book--it's not. Horrible things happen, but it's not of the horror genre.

What's so surprising are the beautiful passages Crouch writes about the most terrible things. He's a writer to watch for and I can't wait for his next book.