Graphic Novel Review - Whatever Happened to the Caped Crusader? 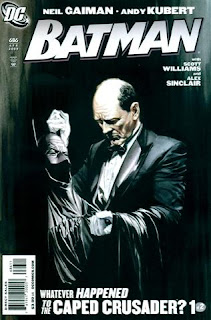 Batman: Whatever Happened to the Caped Crusader?

Batman is dead. The mourners, friends and enemies alike, arrive one by one at a seedy dive in a Gotham back alley to pay their respects. The wake is being held in the bar’s back room. One by one the eulogies begin, but it quickly becomes apparent that all is not as it seems – for none of the mourners remember Batman the same way, neither in the details of his life nor the manner of his passing. Witness to this procession, and narrating the whole affair, is the watchful spirit of the Bat-Man himself.

Superheroes are the myths of the modern age, and who better to write the capstone for one of the most iconic comic-book legends of all than the modern master of myth himself, Neil Gaiman? In comics, death has always been a revolving door, and it is without a doubt that Bruce Wayne will soon return to once again prowl the night. However, no legend is complete without an ending, and what Gaiman has penned is not just a conclusion to one particular Batman story, but for all Batmen, from the dark detective of the 1940’s, to the campy colorful boy scout of the 1960’s, to the grim Dark Knight of the modern era.

As a bonus in the hardback edition is a collection of earlier Gaiman batman stories, including an amusing black-and-white Batman/Joker piece and an origin tale of the villainous Poison Ivy that was one of Gaiman’s very first mainstream comics publications.